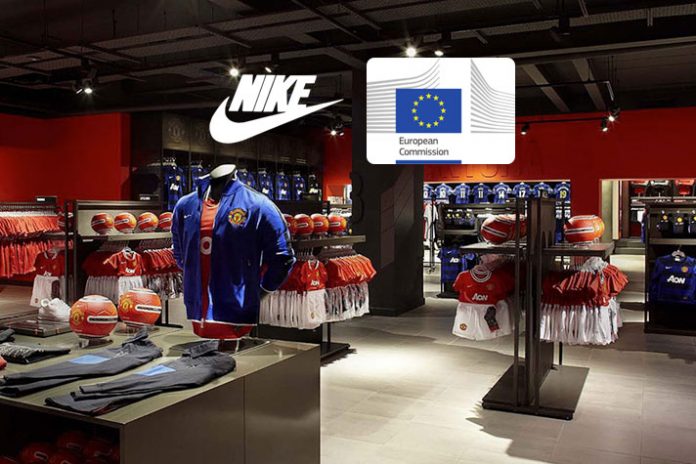 The European Commission has fined Nike €12.5 million ($14.15mn) for banning traders from selling licensed merchandise to other countries within the European Economic Area. This restriction concerned merchandising products of some of Europe’s best-known football clubs and federations, for which Nike held the licence.

The EC has ruled that the US sportswear giant imposed restrictive trading terms on the sale of merchandise for a host of top football clubs over a 13-year period.

Commissioner Margrethe Vestager, in charge of competition policy, said: “Football fans often cherish branded products from their favourite teams, such as jerseys or scarves. Nike prevented many of its licensees from selling these branded products in a different country leading to less choice and higher prices for consumers. This is illegal under EU antitrust rules. Today’s decision makes sure that retailers and consumers can take full advantage of one of the main benefits of the Single Market: the ability to shop around Europe for a larger variety of products and for the best deals.”

Licensed merchandising products are extremely varied (e.g. mugs, bags, bedsheets, stationery, toys) but all carry one or more logos or images protected by intellectual property rights (IPRs), such as trademarks or copyright. Through a licensing agreement, one party (a licensor) allows another party (a licensee) to use one or more of its IPRs in a certain product. Licensors typically grant non-exclusive licenses to increase the number of merchandising products in the market and their territorial coverage, EC has stated in a Press release.

In June 2017, the Commission had opened an antitrust investigation into certain licensing and distribution practices of Nike to assess whether it illegally restricted traders from selling licensed merchandise cross-border and online within the EU Single Market.

The Commission has concluded that Nike’s illegal practices, which were in force for approximately 13 years (from 1 July, 2004, until 27 October, 2017), partitioned the Single Market and prevented licensees in Europe from selling products cross-border, to the ultimate detriment of European consumers. Nike’s illegal practices affected to varying degrees the licensed merchandise products bearing the brands of clubs like FC Barcelona, Manchester United, Juventus, Inter Milan and AS Roma, as well as national federations like the French Football Federation.

Nike, however, has cooperated with the Commission beyond its legal obligation to do so, in particular by providing the Commission with information that allowed it to extend the scope of the case. As a result, the investigation included ancillary sport merchandise of a number of additional clubs. The company also provided evidence with significant added value and expressly acknowledged the facts and the infringements of EU competition rules.

Therefore, the Commission granted Nike a 40% fine reduction in return for this cooperation. Further information on this type of cooperation can be found on the Competition website.

Fines imposed on companies found in breach of EU antitrust rules are paid into the general EU budget. This money is not earmarked for particular expenses, but Member States’ contributions to the EU budget for the following year are reduced accordingly. The fines therefore help to finance the EU and reduce the burden for taxpayers. 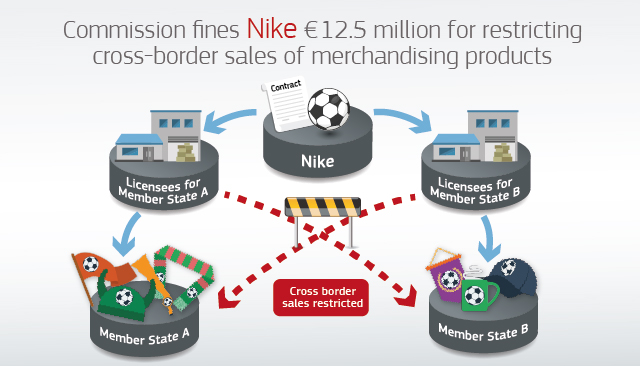 Background to the investigation

Nike’s manufacturing and distribution agreements for merchandising products infringed Article 101 of the Treaty on the Functioning of the European Union (TFEU), which prohibits agreements between companies that prevent, restrict or distort competition within the EU’s Single Market.