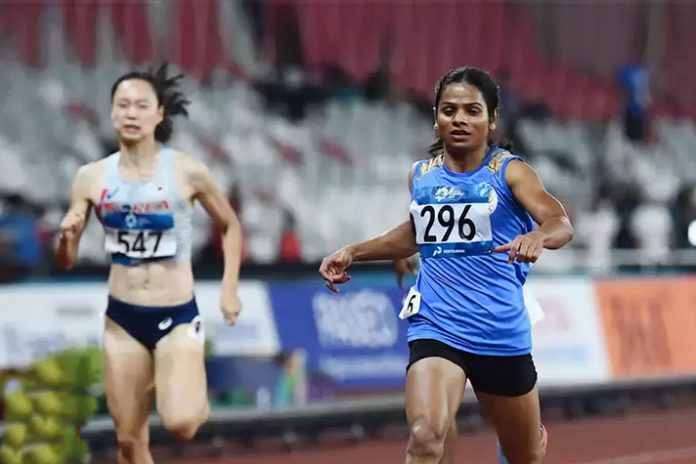 Indian sprint Queen Dutee Chand is a film-maker’s ready subject for blockbuster, a writer’s ready concept for a best seller. There are not many sporting stories like the emergence, fall and rise of Dutee Chand – who has been subjected to the extremes in both success and struggle.

As the Jakarta Asian Games double medallist is still hogging limelight, filmmakers and authors line up to grab an opportunity that will be any cinematographer’s or author’s delight. Coming from a weavers family, which financially remained below poverty line till Dutee rose to stardom, this 22-year Odisha girl had to brave the biggest battle of her career as Athletics Federation of India had dropped her from the national squad, stating that hyperandrogenism (a medical condition characterized by excessive levels of male sex hormones such as testosterone) made her ineligible to compete as a female athlete.

The dream was shattered for the then 18-year-old who was taking the track by storm with her performances at the national, Asian and the world level. A budding female athlete in her late teens was being subjected to humiliating “gender tests”. The most promising female sprinter in India was suddenly finding herself running in a dark, endless tunnel.

But champions don’t give up easily. So did Dutee Chand, the tribal girl from Odisha’s Jajpur district. She with a strong resolve to come clean took the Athletics Federation of India, the body that should have stood by the exceptional talent, and the world governing body for athletics – IAAF – to the Court of Arbitration for Sport (CAS).

Her grit and determination assured that the IAAF policy on hyperandrogenism was suspended by the CAS. The ruling found that there was a lack of evidence that testosterone increased female athletic performance and notified the IAAF that it had two years to provide the evidence. The verdict effectively cleared Dutee’s return to the track. She hasn’t stopped thereafter.

There can’t be a bigger thriller than this tale of an underprivileged prodigy, who in her resolve to make it grand had to defeat the very authorities with whom rested the onus to ensure her success.

Today, Dutee is getting offers for a film and book on her life and struggle. The long struggle has made her realise the value of her life and achievements. She won’t let anyone encash it easily, nor does she appear in a hurry.

Journalist, author and film-maker Sundeep Mishra – who authored Dhanraj Pillay biography and made film on the life of tragic hockey hero Prithipal Singh, the triple Olympic medallist and hockey’s first Arjuna Awardee in 1961 who was shot dead by his own trainee – reportedly was keen to write book on Dutee’s life. However, Dutee has told HT City that she hasn’t given any permission for this book.

“My story is in my hand, and I’ll decide on the person who writes it,” she told the paper. “They can write a news article, but not a book without my permission. I haven’t told anybody to write a book on me. He gave the news to the media that he’s writing it. Maine bhi mail daal diya ki main toh aapko permission nahin diya, aap kaise book likh rahe ho. Kya pata hain aapko mere baare mein (I’ve written a mail asking him how he’s writing a book, when I haven’t given permission for it. I’ve asked him what does he know about me)?” the paper has quoted the athlete as saying.

“My story is very long. And for somebody to write a good story, one needs a good writer, too. My focus is on the Olympics, and not on a book or a biopic on me. Mere upar movie banane ke liye bahut directors phone kar rahe hain (I’ve been getting a lot of calls from filmmakers for a biopic),” she says.

Among the ones to approach her for a movie are said to be the production houses of Rakeysh Om Prakash Mehra and Anil Kapoor “Om Prakash, Anil Kapoor’s production house have approached me. I’ve also got a mail from Hollywood. But I’ve told everyone that I won’t be making a film at the moment. I want to focus on the Olympics. After the Olympics are over, I can focus on making a film.”

Dutee’s emergence from hardship and rise to stardom will inspire a generation and the athlete herself believes that biopics on sportspersons do give “motivation to children”.