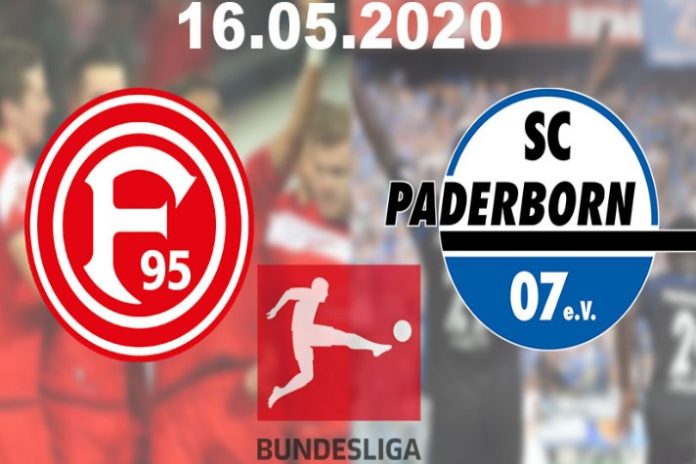 Bundesliga 2020 LIVE between Dusseldorf and Paderborn on Saturday, The Bundesliga will become the first major league to return amid the coronavirus pandemic this weekend, with a full set of fixtures ending a shutdown which has lasted for more than two months.

A relegation battle looms as Fortuna Düsseldorf enter this game against Paderborn looking to end a three-game winless run in all competitions. Each of those three games saw both teams score, but netting first will be coach Uwe Rösler priority as his side are unbeaten in the previous eight competitive matches in which they scored the opener (W5, D3).

At home, however, Düsseldorf are on a four-game winless Bundesliga streak (D2, L2), and have now conceded in seven straight fixtures here. An average of just 1.08 goals scored per home league match – the division’s third worst – has been their main downfall, although Düsseldorf did net before half-time in their last three competitive home wins.
Paderborn look destined for the drop after registering a six-game winless run (D1, L5), despite both teams scoring in five of those games. They’ve now conceded before half-time in their previous six Bundesliga defeats, although they also scored after the break in five of them.

On the road, six of Paderborn’s previous nine away league games saw just one side hit the net (W2, D2, L5), with both their away wins coming ‘to nil’. In fact, Paderborn are unbeaten when scoring the opener on the road this Bundesliga campaign (W2, D2), but have lost seven of eight away games in which they conceded first.

Stat attack: There’s been at least one goal on or after the 75th minute in four of Düsseldorf’s last five competitive matches.
Paderborn haven’t seen a goalless draw in their last 35 competitive away games.
Six of the last seven H2Hs have featured goals in both halves.