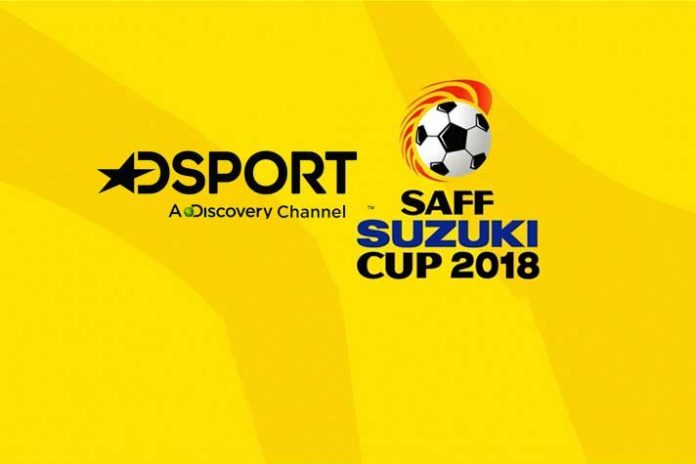 DSport, a Discovery Communications India-owned sports channel, will broadcast the live action of the South Asian Football Federation (SAFF) Championship 2018, slated for September 4 to 16, in India.

InsideSport has earlier reported that DSport will be the official broadcaster partner in the Indian sub-continent for the 2018 edition of the men’s national team football tournament in South Asian region.

The 12th edition of the SAFF Championship, aka 2018 SAFF Suzuki Cup, will kick off from 4th September 2018 in Bangladesh with seven teams in fray for the title. Indian football fans and supporters of Indian football team can catch all the live action on DSport as the ‘Blue Tigers’ will be looking forward to clinch the eight title of the most important and competitive championships of the South Asian Region.

The record seven times SAFF Champions India has been pooled with arch rivals Maldives and Srilanka for the group stage of the competition. With star players like Sunil Chhetri and Gurpreet Singh missing out on this Championship, the responsibility to get the necessary goal conversions will depend on young talented strikers like Rahul KP and Sumit Passi.

Additionally, SAFF will be a huge opportunity for Prabhsukhan Singh Gill, Suresh Singh Wangjam, Rahim Ali who have been given a chance to showcase their talent after their splendid performance in the Under 17 World Cup.

Anirudh Thapa who has also been awarded as the emerging player of the year in the 2017-18 season of Indian Super League (ISL) will be a key man in the Midfield along with this its packed defense line team India will be prepared to make a mark and ‘battle for the Title’. With the kind of form that the Indian Team is in this contest will be a treat for the Indian football fans.

The Match Schedule for SAFF Championship 2018:

Previously known as ‘South Asian Association of Regional Co-operation Gold Cup’ held in 1993 and ‘South Asian Gold Cup 95’ in 1995, the tournament was renamed as the ‘South Asian Football Federation (SAFF) Championship’ in 1997, with India won the inaugural SAARC Gold Cup in 1993 and also the SAFF Championship in 1997. Since its beginning, the biennial competition has developed with a focus on improving and promoting the game in the region.