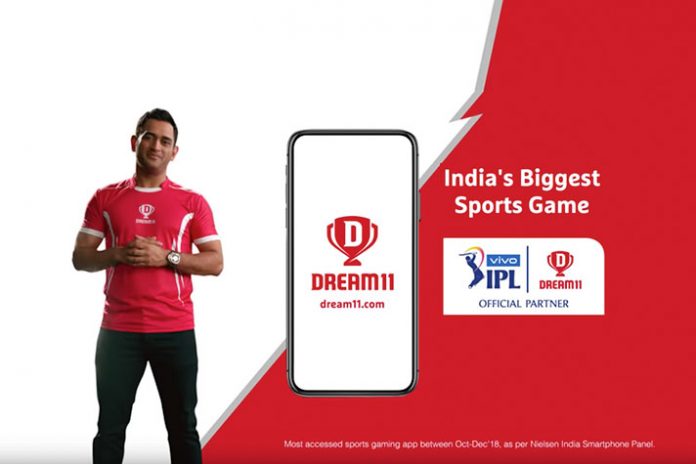 The six films, conceived and created by Tilt Brand Solutions in 6 different languages, capture the spirit of cricket fans in diverse situations and also feature Dream11‘s brand ambassador MS Dhoni. The plots of the films will make every sports fan smile with nostalgia as they creatively attempt to establish the brand’s belief of immersing every fan in his/her favourite sport.

On the launch of the campaign, Harsh Jain, CEO and Co-Founder of Dream11 said, “We’re thrilled to launch our unique advertising campaign that salutes the effort a true cricket fan makes to play a game of cricket. As sports fans, we’ve all been through some innocuous problems to play a game of cricket, and there’s always a hero who ensures that the game goes on. Our campaign celebrates these heroes and I’m sure it will strike a chord amongst all cricket fans. We believe this campaign will play a pivotal role in engaging our current 5 crore users and help us in welcoming onboard another 50M users to Dream11 in 2019”.

Vikrant Mudaliar, Chief Marketing Officer, Dream11, said: “With a strong user base of over 5 crore ‘fans’, Dream11 has established itself as the leader of the Indian Sports Gaming industry. This IPL season, our campaign takes an innovative route for the brand’s storytelling, by paying an ode to the most loved sport in India and its passionate fans. The campaign attempts to further establish Dream11 as the platform where every fan can connect with their favourite sport. Dream11 celebrates this passion and emotional connection of fans with cricket through – “Ye Game hai Mahaan”. We are confident that the brand campaign will resonate with cricket fans and our users across the country, stirring memories of their experiences with the sport.”

Shriram Iyer, Chief Creative & Content Officer, Tilt Brand Solutions said, “Cricket in India is so popular not just because of the game and its players, but arguably more so, because of the fans who are obsessed with it. The films showcase acts of dedication and heroism of fans for the cause and sake of cricket. These films truly are, made about cricket fans for cricket fans.”

The campaign will also engage with fans and users on Facebook, Twitter, YouTube and Instagram. The films will go live in a sequential manner over the next few weeks and as of now 2 films are out and the campaign seems to have already hit the right note amongst viewers and fans.

Among the 5 crore+ users on Dream11, 85% play cricket. As a cerebral game of skill, Dream11 helps users to apply their cricket knowledge and expertise giving fans an opportunity to become a champion. The films are true to the brand’s belief of not only celebrating the victories of the cricket greats but also the everyday unsung heroes, and how both of these together make cricket such a great game.