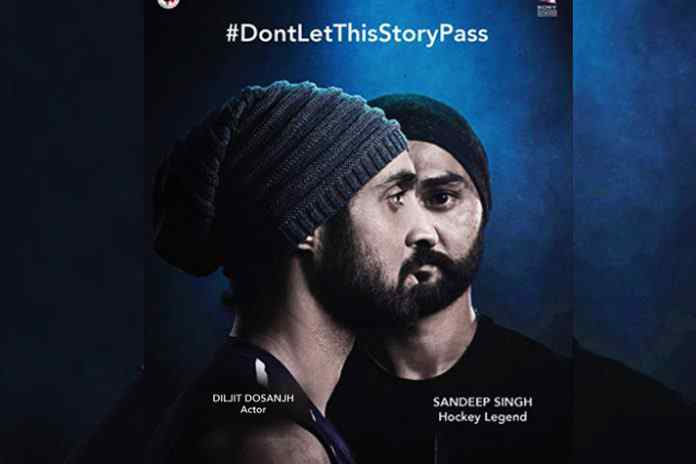 The first poster of Sandeep Singh biopic, starring singer-actor Diljit Dosanjh as the ace drag flicker is out. The hockey star is extremely impressed with Dosanjh’s transformation into an on-screen sportsperson.

The ‘teaser’ showing the real and reel Sandeep Singh in a single frame establishes “beyond doubt there could have been no better choice to play Sandeep in the biopic”.

Female lead Taapsee  Pannu and Diljit have been taking extensive training to learn hockey from professionals and started its shooting in October this year. Taapsee has been sharing her look from the sets but Diljit has kept his character’s look or any other information under wraps. With an interesting casting, we are sure this project is something to watch out for.

Dosanjh’s sporty looks have impressed Sandeep himself the most. “Diljit (Dosanjh) is working relentlessly. His overall transformation and athletic looks show that how much effort he has been putting in for that role. There could not have been a better choice to play my character,” Sandeep Singh told Insidesport.co.

“He (Dosanjh) is strictly following an international athletes lifestyle and training regime. No junk food, strict diet regime and no sweet. He has trained so hard for this role. I can’t expect anything more,” says Sandeep.

The biopic on the penalty corner specialist, directed by Shaad Ali, is being produced jointly by Sony Pictures, Chitrangdha Singh, and Deepak Singh being directed by Shaad Ali, is Diljit’s first sports film. “I can’t thank the entire team – from creative and casting team to the producers – enough for the amazing job they have been doing. It is not easy to recreate the life and journey of a sportsperson. From casting to creative, each aspect requires great degree of precision as people already know so much about the sportsmen who are still active,” says Sandeep.

Sandeep was the first choice penalty corner specialist for the Indian national hockey team after his predecessor Jugraj Singh’s promising career was abruptly interrupted by a freak accident. As the fate would have it, Sandeep too suffered severe back injuries after being hit by an accidental gunshot on the Shatabdi Express to join the national team for the World Cup in Germany.

The gritty defender had recovered to regain the prestigious Blue Jersey of Indian national hockey team. The 31-year-old is now serving the Haryana Police as a Deputy Superintendent.