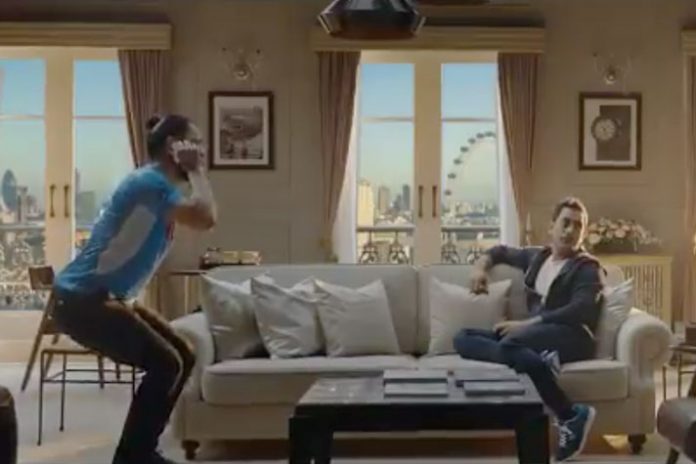 Is Chase Master Mahendra Singh Dhoni feeling the pressure of Team India’s chase for their ICC World Cup crown. Is the pressure so high that Mr Cool decides to punish the fan who oozes with confidence that #CricketKaCrown hum le jayenge(We will bring home the World Cup).

Dhoni being furious to the extent of making the ardent team India supporter do sit-up is hard to believe. Coming out with hard to believe stuff in cricket broadcast is routine for Star Sports, the ICC media rights partner and the host broadcaster for the World Cup 2019. The hard to believe Dhoni-fan act too is a brain child of Star Sports creative team that comes out with out of the box fan engagement ideas.

The Dhoni-fan act is a spectacle from the Star Sports campaign video to boost the excitement for the World Cup in England and Wales. The prankster Dhoni making fan “Vicky”, the lead character of Star’s World Cup campaign series #CricketKaCrwon, sit-ups is the sequel of the first campaign video #CricketKaCrown hum le jayenge.

? – that face when you confidently sing ‘#CricketKaCrown hum le jayenge’ but then meet @msdhoni!

The ICC #CWC19 is going to be one tough tournament but ab bol diya toh…??

Watch it all LIVE, May 30 onwards, on Star Sports. pic.twitter.com/rw4Ri1WeCx

The second TVC starts with Dhoni taking on the fan “Vicky” after watching the first video, which shows him telling the world #CricketKaCrown hum le jayenge. Dhoni plays a prank by asking the fan to do sit-ups for adding to the team’s pressure with such claims.

The video next reveals that the fan has also set #CricketKaCrown as his mobile phone ringtone. With that comes the twist as an angry Dhoni’s face expressions change and the seasoned pro with a smile tells the fan that Team India is ready and will give it all.

India start their ICC World Cup campaign on June 5 at Southampton with the tie against Proteas. The World Cup in England and Wales will be played from May 30 to July 13.