Djokovic VISA Issue LIVE- Australian Open LIVE Updates: Australia said Friday it will detain Novak Djokovic this weekend after again stripping him of his visa. He will be in immigration detention from Saturday morning — not on the Melbourne Park tennis courts. The megastar’s bid to avoid deportation will be heard by Australia’s Federal Court at 10:15 am on Saturday. Follow AO2022 LIVE Updates on InsideSport.IN

But Djokovic is expected to attend government offices at 8:00 am Saturday (2100 GMT Friday) to be placed in detention. He would be allowed out of detention to follow online court hearing at his solicitors’ offices, but only under the supervision of Australian Border Force officers, the barrister said.

The Australian government has once again cancelled World No.1 Novak Djokovic’s visa on Friday, saying the vaccine-sceptic tennis superstar may pose a risk to the community. Immigration Minister Alex Hawke used discretionary powers to again cancel Djokovic’s visa, after a court quashed an earlier revocation and released him from immigration detention on Monday.

The development puts Djokovic’s participation in jeopardy. He is eyeing record 21st Grand Slam and tenth trophy in Melbourne. However, Djokovic’s lawyers are expected to appeal the cancellation in the Federal Circuit and Family Court as they successfully did after the first cancellation.

“Today I exercised my power under section 133C(3) of the Migration Act to cancel the visa held by Mr Novak Djokovic on health and good order grounds, on the basis that it was in the public interest to do so,” Hawke said in a statement. 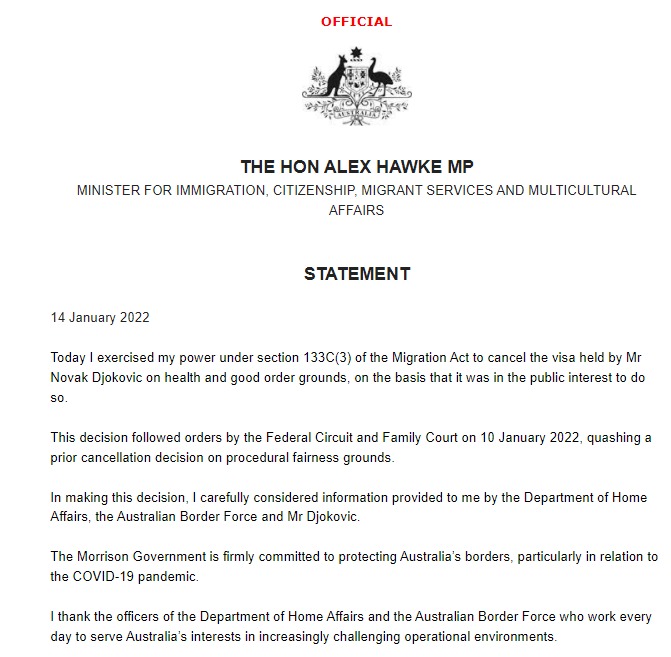 But Lawyers for Australian Immigration Minister Alex Hawke have agreed to not deport Djokovic from Australia. Djokovic’s lawyers submitted their request for an injunction late at night, less than three hours after Hawke used discretionary powers to revoke the visa.

The player’s legal team said Hawke had argued that allowing Djokovic to stay would excite anti-vaccination sentiment. His lawyers called Hawke’s decision “patently irrational”. They said they hoped their challenge could be heard by Sunday, the day before the tournament starts.

Under Section 133C, Djokovic would not be able to secure a visa to Australia for three years, except in compelling circumstances

18:29 IST: Australian Open announces that the top half of the Men’s singles draw (which includes Djokovic) will be played on Monday.

16 IST: “Australians have made many sacrifices during this pandemic, and they rightly expect the result of those sacrifices to be protected,” Australian PM Morrison said in a statement.

“This is what the minister is doing in taking this action today. Our strong border protection policies have kept Australians safe,” he added.

14:40 IST: Novak Djokovic has been asked to present himself for interview with immigration officials on Saturday.

Novak is a great tennis player & one of the all time greats. No doubt. But he’s lied on entry forms, been out in public when he knew he had covid & is now facing legal cases. He’s entitled to not be jabbed but Oz is entitled to throw him out ! Agree ? #shambles

Australian Open LIVE Updates – Djokovic vs Kecmanovic LIVE:  The 20-time Grand Slam champion and reigning champion has been drawn against fellow Serb Miomir Kecmanovic in the first round as he seeks to claim his 10th Melbourne Park trophy.

If his VISA is REVOKED, Djokovic will be forced to withdraw from the tournament should he be unsuccessful in his bid to appeal a second cancellation of his visa.

It would mean Kecmanovic would therefore receive a walkover.

Djokovic, the defending champion, was included in Thursday’s draw as top seed and was due to face fellow Serb or his opening match, probably on Monday or Tuesday.

A decision to again cancel his visa could set up a second court battle by the Serbian tennis star, after a court quashed an earlier revocation and released him from immigration detention on Monday.

What are the Australian Papers & Media saying? Melbourne’s The Age newspaper cited a source in Prime Minister Scott Morrison’s Liberal Party as saying the government was “strongly leaning” towards revoking the visa again.

Finance Minister Simon Birmingham said on morning television on Friday that visa decisions were a matter for the country’s Immigration Minister Alex Hawke, but the policy settings of the government overall were “crystal clear”.

“That is that people who enter Australia who are not Australian citizens should be double dose vaccinated unless they have a clear and valid medical exemption against that,” he said on Channel 9’s Today Show.

An online poll by the News Corp media group found that 83 per cent favoured the government trying to deport the tennis star.

The Committee for Melbourne, which represents business and arts leaders, says the city’s reputation for hosting events has been damaged by the dispute.

“The Djokovic visa and vaccination saga has reflected poorly on all those involved, which is a tragedy considering the excellence of our infrastructure and tournament planning,” Chief executive of the committee Martine Letts told The Age.

Djokovic VISA Drama LIVE: Why Australia can deport him? The questions are being raised now on did Djokovic deliberately lied on Australia VISA Form?

The star himself has blamed “human error” by a member of his team for failing to state he had travelled outside of Serbia in the 14-day period prior to entering Australia.

The Serbian star flew into Australia a week ago claiming a vaccine exemption because of a positive PCR test result on December 16.

Border agents rejected his exemption saying a recent infection was an insufficient reason, tore up his visa and placed him in an immigration hotel.

But the vaccine-sceptic Djokovic’s high-powered legal team dramatically overturned the visa decision in court on Monday on a procedural matter related to his airport interview. The World No. 1 was released from the hotel and has trained at Melbourne Park several times since.

Now, Immigration Minister Alex Hawke, who holds the power to cancel visas, says he is considering cancelling the visa another time, as fresh doubts emerge about Djokovic’s travels in the two weeks before he arrived in Australia.

“This was human error and certainly not deliberate,” Djokovic said in a post on Instagram. “We are living in challenging times in a global pandemic and sometimes these mistakes can occur”

IPL 2022 Wooden Spoon: MOST EMBARRASSING RECORD for Mumbai Indians in their entire history of IPL, will finish with WOODEN SPOON for the 1st...

IPL 2022 Wooden Spoon: MOST EMBARRASSING RECORD for Mumbai Indians in their entire history of IPL, will finish with WOODEN SPOON for the 1st...