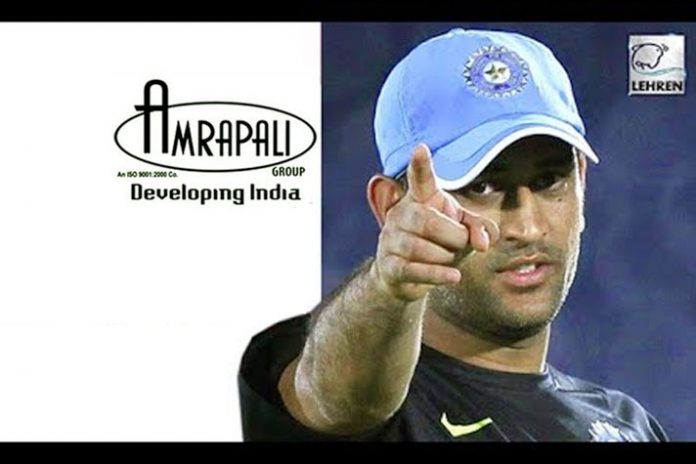 The India and Chennai Super Kings wicketkeeper has move the Supreme Court to seek an order against the Amrapali Group for payment of his dues towards service fee as the brand ambassador of the company as the company faced charged of duping the homebuyers, who had also launched social media campaigns against Dhoni for his association with the brand.

Dhoni’s wife Sakshi has also been associated with the charity operations of the Amrapali Group. According to a Times of India report, the company owes ₹ 38.95 crore to Dhoni for his services. The figure includes the outstanding and the interest.

Dhoni has reportedly pleaded the Supreme Court to earmark certain land parcels of the Amrapali group for him to protect his interests.

The Amrapali group and its directors are already facing several cases in the Supreme Court. The petitions are filed by over 46,000 homebuyers against the Amrapali group for duping them by neither delivering them houses nor paying back their debts.

Also Read: Dhoni opens up on 2013 IPL fixing scandal, asks what did players do to…

Former Indian skipper MS Dhoni has approached the Supreme Court against the Amrapali group seeking the apex court’s intervention to get ₹40 crore from the group for using his services for branding and marketing activities for six years.

Dhoni had reportedly told the court that the company had entered into various agreements with the Amrapali group to promote the brand and its various housing projects but it did not pay the money for his services and claimed that a told amount of ₹  38.95 crore is due to him.

“The builder, Amrapali group, owes an amount in excess of Rs 38.95 crore of which Rs 22.53 crore is towards the principal amount and Rs 16.42 crore towards interest calculated at 18% simple interest per annum,” he has stated in the petition.

Dhoni has attached copies of his agreements with the builder along with his petition. Referring to the agreement signed between the Amrapali group and Rhiti Sports, the company that manages some cricketers including Dhoni, the Dhoni has stated that “It was agreed that the firm will provide Amrapali Group with exclusive right to use his (Dhoni’s) endorsement in connection with the advertisements, marketing and PR activities. Also it was categorically agreed that all the payments under the agreement was to be paid to the applicant (Dhoni) only.”

The Supreme Court last month has sent the Amrapali group CMD Anil Sharma and two directors—Shiv Priya and Ajay Kumar— to police custody for interrogation for cheating thousands of homebuyers who have invested money but were not given flats.