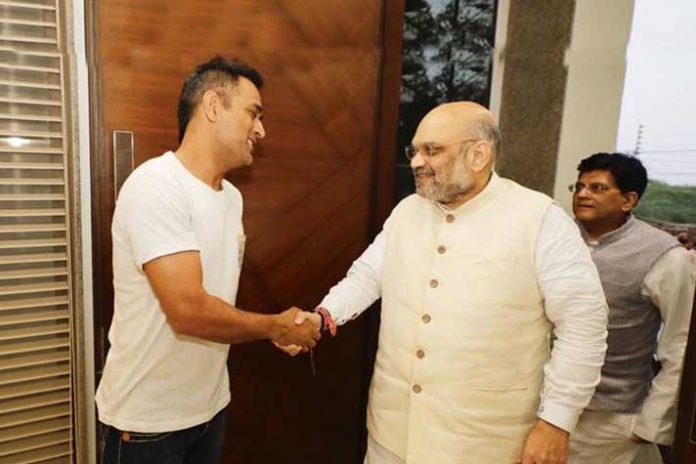 Shah established “sampark” with the celebrity cricketer to seek his “samarthan” as part of BJP’s “Sampark for Samarthan” campaign in run up to the general elections next year. “As part of ‘Sampark for Samarthan’ initiative, met MS Dhoni, one of the greatest finishers in world cricket. Shared with him several transformative initiatives and unprecedented work done by Prime Minister Narendra Modi’s govt in the last 4 years,” Shah posted on his official tweeter handle.

As part of “Sampark for Samarthan” initiative, met @msdhoni, one of the greatest finishers in world cricket. Shared with him several transformative initiatives and unprecedented work done by PM @narendramodi‘s govt in the last 4 years. pic.twitter.com/dpFnPWTwWn

Shah’s outreach to Dhoni was the latest in a series of meetings he has had with leading figures from various fields as part of the BJP’s mega public contact drive with Lok Sabha polls less than 10 months away, adds PTI.

More than 4,000 functionaries of the party have been asked to get in touch with one lakh people, who are well-known in their fields, to spread the word about the government’s achievements.

Shah will himself meet about 25 people, the party had said.

The BJP president had started his “sampark for samarthan” drill by meeting former Army chief Dalbir Singh Suhag and ex-secretary general of Lok Sabha Subhash Kashyap on May 29. Since then, he has met industrialist Ratan Tata and actress Madhuri Dixit among others.

Also Read: From 23 to 37: 14 years of Brand Dhoni’s commercial journey

Shah had said the campaign was aimed at informing people about various government initiatives that resulted in improving their living standards.