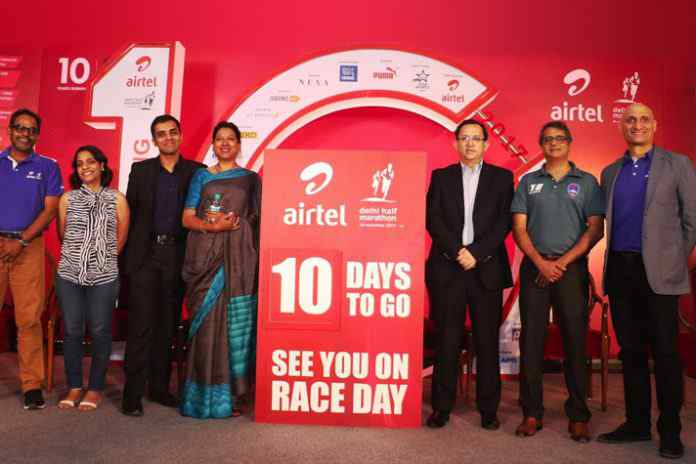 Delhi Dynamos have joined hands with Airtel Delhi Half Marathon to promote fitness in the city.

At a time when Delhi is faced with a health emergency, the Indian Super League club has come forward to join hands with city’s most prestigious run to promote fitness and awareness.

The countdown for the 10th edition of the Airtel Delhi Half Marathon has begun with 35,000 running enthusiasts including the top long-distance runners gearing-up for the world’s most prestigious Half Marathon to be held on November 19, 2017.

This year’s race day will witness a supreme battle between the best of Indian and International elite athletes. Getting off the blocks is the Men’s World Marathon

Extending sport to the event amidst health concerns for Delhiites as the Capital is faced with its worst ever pollution and environment crisis, Delhi Dynamos CEO, Ashish Shah, said that “Delhi has developed an incredible spirit and culture of running, thanks to the Airtel Delhi Half Marathon. We (Delhi Dynamos) are happy to join them in celebrating this sportsman spirit of our city. As a football club, fitness & health are the two most important aspects for us. From grassroots to the first team, fitness is the basis of becoming a top athlete and that is the message that we want to give out to all the runners as well. Our coach and our players look forward to interacting with the participants and inspire them with techniques that are being used at the pinnacle of the sport.”

Getting off the blocks is the Men’s World Marathon Champion Geoffrey Kirui (2:08:27) and Airtel Delhi Half Marathon Defending Women’s Champion Worknesh Degefa (67:42) along with the Women’s 10,000m World Champion Almaz Ayana, who won Gold at the same event in Rio Olympics 2016. Yigrem Delemash, the runner up of last edition of Airtel Delhi Half Marathon, will challenge Geoffrey Kirui for the title in the Men’s category.

The Indian challenge, on the other hand, will be led by ADHM Indian Men’s Defending Champion G Lakshmanan returning to the event who will be challenged by 2015 edition winner Nitender Singh Rawat. The fiercely determined 27-year-old Lakshmanan is in top form and he even gave India a reason to celebrate when he won the double Gold Medal at the recently concluded Asian Athletic Championship in 10000 & 5000 meters.

The 31-year-old Nitender Singh Rawat’s story is nothing short of a real-life hero. He served as infantry Havaldar of the 6th Kumaon Regiment in Kashmir before running 42kms under 2.19 mark to see himself qualify for the Rio Olympics. Olympian and Asian Athletics Championship 3000M Steeplechase Gold medalist Sudha Singh will be headlining the elite Indian women’s line up. A star-studded lineup such as this assures pulsating competition on race day.

The event has heralded a new high with registrations closing in a record 20 days for half marathon with 13,000 runners signing up for the event. The US$ 2,75,000 event will witness 35,000 participants running in four race categories- Half Marathon (Elite & amateur), Great Delhi Run, 10K Run, Senior Citizens and Champions with Disability.

“As always, it is great to see the fantastic response to the call for registrations for Airtel Delhi Half Marathon. Over the past decade, the marathon has successfully evolved into a truly vibrant platform that celebrates the spirit of running and helps bring the city together. We wish the organisers, Procam and the participants the very best for this year’s run,” said Ravi Negi, CEO, Delhi NCR, Bharti Airtel.

The only British athlete to have won Gold medals in the 100 metres at all four major competitions Olympics, Commonwealth Games, World Championships & European Championshipsand and the first European to have run sub ten seconds, Linford Christie will be present at the Airtel Delhi Half Marathon to motivate all runners. Commenting on the countdown towards Race Day, he said, “. I am very excited to be in India and I will see you all at the race on 19th.”

Vivek Singh, Jt, Managing Director, Procam International shared, “We are delighted to have entered the 10th edition of this marquee running event. It’s heartening to know that the enthusiasm of the runners is intact and the participating numbers this year proves that. The presence of sporting legends like Linford Christie and Anthony Ervin makes this edition more special and will provide an extra zip to the participants. We appreciate the support of our sponsors and all stakeholders in helping to make this event possible and look forward to a successful race day on 19th November.”