DC Retained Players – IPL 2022 Retentions: Delhi Capitals (DC) have turned out to be coolest & smartest when it comes to retention of players. Without any hitch, DC has released most of their old warhorses and have retained Rishabh Pant, Axar Patel, Prithvi Shaw & Anrich Nortje. All these 4 are young and will serve Delhi Capitans for the next 3 years. Follow all LIVE Updates of IPL 2022 Retentions on InsideSport.IN

“It was a far from easy task for all of us at the franchise to retain just four players. In the last three years, we focused on the building a balanced squad as much as possible, which produced some of our best results. Delhi Capitals would like to express gratitude to each player for always giving their everything to this team. We wish all the very best to each one of them,” DC’s interim CEO Vinod Bisht said.

That means they will have Rs 47.5 Cr remaining in their purse in the IPL 2022 Auction. Axar Patel, although will be getting Rs 9 Crore, from DC’s purse, Rs 12 crore will be deducted due to IPL retention rules.

“It’s not fair that you build a team, you groom them, and they play for their countries and you lose them in the end. IPL needs to have a look at it, but it is what it is. I wish our outgoing players the best. With the money we have, we’re going to try and bring as many of them back as possible,” DC co-owner Paarth Jindal said. 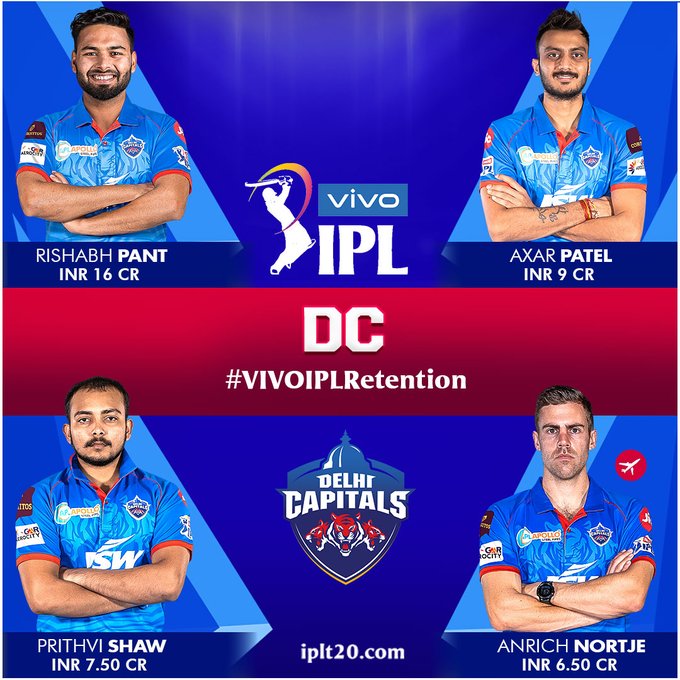 Why DC not retaining Shikhar Dhawan? Dhawan has been one of the most successful & attacking batsman in the history of IPL. He also has been the highest run-getter for Delhi Capitals in both IPL 2020 & IPL 2021.

With such an awesome record – why did DC management decide to not retain Dhawan? The source in DC management told InsideSport that it is his age & falling Strike Rate that went against Dhawan.

“Shikhar is now almost 36. Players are getting retained for the next 3 seasons & the franchise wanted to retain those players who can serve the team for the next 3 years. Moreover, Dhawan’s strike rate also has been an area of concern. Last year he scored, but he wasn’t that fluent. This is the reason DC decided to invest on the younger players.”

In comparison, all 4 retained players are young & DC management feels they will form the nucleus of the team for the next 3 years. Rishabh Pant is 24, Prithvi Shaw is 22, Axar Patel is 27 & while Anrich Nortje is 28 years old.

Not only Dhawan, for the reason franchise has also let go two of their most successful spinners i.e R.Ashwin & Amit Mishra. Also, Delhi has decided not to retain their IPL 2020 captain Shreyas Iyer.

CHECK all NORMS for RETENTIONS

TOTAL Players Purse – 90 Crore: How the retentions will work?

STAR SPORTS to LIVE STREAM & LIVE Broadcast the RETENTIONS LIST: The IPL 2022 retentions will go live at 9.30 PM on Tuesday and all eight IPL franchises will be revealing their final picks.

All the 8 teams– RCB, CSK, SRH, DC, MI, KKR, RR and PBKS– will reveal their final retention. As many as 4 players could be picked ahead of the IPL 2022 Auctions.

For more sports news and IPL 2022 Retention live updates, follow us at InsideSport.IN