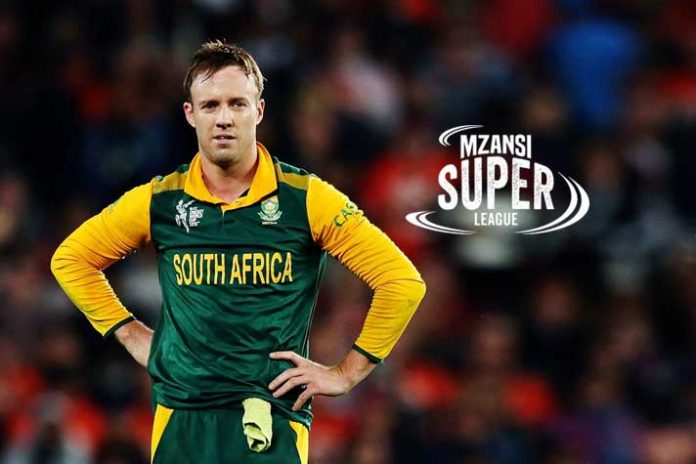 AB de Villiers has been appointed captain of the Tshwane Spartans for the first edition of the Mzansi Super League.

A former South African national captain, the 34-year-old has plenty of T20 experience, having featured in 251 T20s, with an enviable strike-rate of 147.91. A veteran of the Indian Premier League (IPL), the flamboyant batsman has featured in every season of cricket’s premier T20 tournament.

De Villiers’ heart lies in the Tshwane region; he was born, raised, schooled and learned his cricket there and the Spartans’ home ground, SuperSport Park, has been treated to numerous grand feats throughout his memorable career.

When he leads the Spartans out on the opening night against Cape Town Blitz on Friday at PPC Newlands, it will be his first appearance in a competitive match since he announced his retirement from international cricket earlier this year.

“I’m really excited to work with this group of players – there’s a lot of talent, with a great balance between youth and experience.

“Even though we’re missing out on a few players that aren’t available yet, we still have a fantastic balance in the side. There’s good skill right through, with batting depth all the way down to number nine, which isn’t normally the case with T20 cricket.

“I’m excited about our bowlers as well. There’s lots of experience with a number of guys who have done this day in and day out and a couple of wrist spinners, with the option to go right or left-arm orthodox, so there are lots of variations.”

When talking of his own style of captaincy, De Villiers will look to draw on his vast experience.

“I try to lead from the front and rely on the experience I’ve picked up over the years. I believe I’m a decent man manager when it comes to understanding players’ strengths and weaknesses. I’m looking forward to it. It’s an exciting challenge and I’m ready for it.”

Having previously worked alongside De Villers as both a player and coach, Mark Boucher believes his experience is well-suited for a tournament of this magnitude.

“The players that make up our squad are leaders in their own right but you need someone to tie that all together and AB knows these conditions better than anyone. He’s comfortable in his own space and in tournaments like these.

“In the IPL he’s played in big pressure matches so he’s the perfect man for the job. He leads from the front and plays with great intensity. For T20 cricket that’s what the game is all about.  AB and Virat Kohli are in the same sort of mould, and how Virat rallies his team is how I think AB will rally the Spartans.

“I know the other guys will want to play for him and at his intensity, and that will get the best out of their own game.”

De Villiers’ first call of duty will be later tonight, when the Spartans travel South of the Jukskei to take on Jozi Stars in a practice match under the lights at the Bidvest Wanderers, ahead of Friday’s opener.

The first match is one of three on the road, before the men in red and green make their home debut at SuperSport Park against the Nelson Mandela Bay Giants on Sunday, 25 November.

“We start with three away games which is not normally ideal, but on the other hand, it gives us the opportunity to get a few away wins under the belt and hopefully we start well,” added De Villiers.