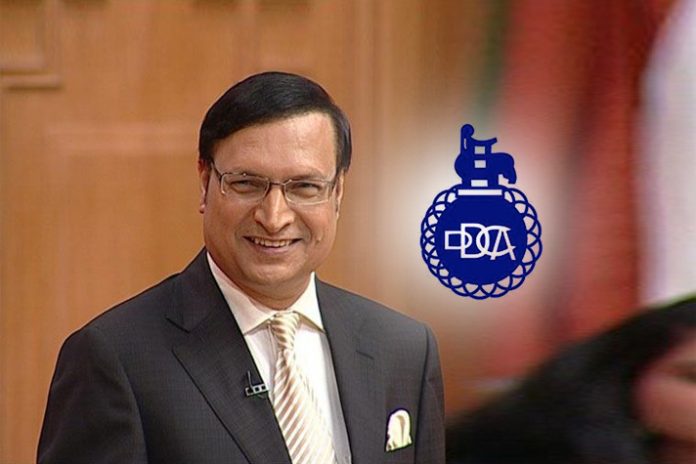 Delhi and District Cricket Association (DDCA) president Rajat Sharma is in for the real ‘test’ of cricket administration in India. A revolt is brewing against the veteran journalist and the new DDCA president in his own camp. The very people who stood by and backed Sharma in the DDCA elections in June are now up in arms against him in two months’ time.

The revolt is led by the camp of DDCA secretary Vinod Tihara, who was instrumental in Sharma’s grand success in the DDCA elections. The very people who handled social media for Rajat Sharma & Co’s campaign for the DDCA elections, have now circulated a media invite for a Press conference called to highlight the “clandestine and illegal acts of Rajat Sharma”.

The Press Conference is called by newly-elected DDCA Director Sanjay Bhardwaj, who has levelled serious charges against the DDCA President. Sharma is accused of “blatantly and brazenly violating the judgements, directions of the Hon’ble Supreme Court of India in a Civil Appeal No 4235/2014 and the Delhi High Court in WP (c) No 7215/2011.

The DDCA president is alleged to be “guilty of fielding his own men as members of Cricket Committee to select the selectors, coaches, managers, physio, trainers, etc. in utter disregards and violation of the conflict of interest norms laid down by the DDCA Articles as well as the Hon’ble Supreme Court and the Delhi High Court.

“Appointing his own men as the CEO, COO, CFO, GM (operations) in DDCA in an opaque and non-transparent manner, without following due process and procedures; and “Shielding people found guilty of fraud and siphoning of DDCA funds worth crores (of rupees) by the Forensic Audit conducted by Justice (Retd) Mr Vikramjit Sen and confirmed by the Hon’ble Delhi High Court.”

Interestingly enough, the people being termed “guilty” and the ones leading the revolt were “a team” in the DDCA elections a mere six weeks ago.

A senior rival, who had lost to the Vinod Tihara-Rajat Sharma camp in the DDCA election told insidesport.co, “He (Rajat Sharma) will have to understand that DDCA cannot be run by sitting in Noida. The DDCA politics is more complex than the administration of a newsroom. There, people are your employee and at your mercy. Here you need to have a better and bigger understanding of the things for survival.

“It is just the beginning. I cannot judge that who is wrong and who is right in this conflict. But what is transpiring is not right for the Delhi cricket.”

All is not well in the DDCA. The division in the Rajat Sharam-led body is apparent. Shortly after the media invite for the conference “to highlight the President’s wrongdoings”, Sharma camp has also issued a Press release, charging the “vested interest of spreading lies”.

The DDCA in the release has stated that the executive committee has taken all decisions “unanimously for the welfare of cricket in Delhi”. However, if the decisions were taken unanimously then why is the section “controlled by the DDCA secretary” is leading the revolt against the President.

“The voice of dissent is a result of vested interests and personal favours not being allowed by the President and the executive committee. We are working together to make the DDCA a professional and transparent body which obviously does not go well with the people looking for personal gains,” stated the DDCA press release.

“We would like to apprise you that certain negative elements with vested interests within the DDCA are trying to spread lies about our executive committee and making futile efforts at showing rifts within the executive. However, we are happy to let you (media) know that we are together in this journey and determined to fulfil the promises that our president Mr Rajat Sharma had made to you during the elections,” stated the DDCA statement.

The statement by the DDCA is not attributed to any individual or office-bearer though. In general, such statements are issued by the secretary. Tihara’s name not being there in the release is an indicator that all might not be well between the DDCA president and the secretary.

Sharma beat the 1983 World Cup winning team member Madan Lal by 547 votes to step into the office of the DDCA president. Sharma had tallied 1521 votes, while Madan Lal has got 1004.