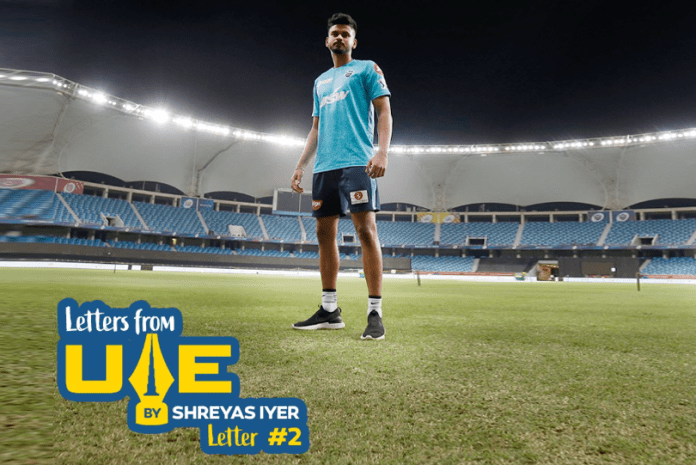 IPL 2020: Finally the wait comes to an end as only a few hours are left to begin the new season of Indian Premier League (IPL 2020).Delhi Capitals (DC) will start their match on Sep 20 against Kings XI Punjab (KXIP).

Delhi Capitals captain Shreyas Iyer again penned down a heartwarming letter from his bio-bubble in UAE. The social media handle of Delhi Capitals (DC) team shared the letter of their skipper Iyer. While sharing the post Delhi Capitals wrote “#LettersFromUAE by Shreyas Iyer ✍?#SkipperShreyas pens down his thoughts on the new normal without spectators.

#LettersFromUAE by Shreyas Iyer ✍?#SkipperShreyas pens down his thoughts on the new normal without spectators ?️

It’s been about 3 weeks here in Dubai now, the longest we’ve had together as a team before an IPL. Everybody’s found a routine and a rhythm to go about things. Whether it’s the Dubai lake that overlooks our rooms, the hotel staff that works tirelessly for all of us, or even the ICC Academy where we train on most days – it’s all very familiar now, and you feel like you’re a part of this space.

It was only when we set foot on the Dubai International Stadium yesterday that it struck me – the IPL is here! The tournament we’d all been waiting for, the days of hotel quarantine, the training, and hard work everyone had been putting in – it was all leading up to the tournament, and THIS is where we were going to kick things off, in a couple of days.

The IPL branding was up, as were the lights, as we warmed up for a fielding session. The lights – I’d never seen anything like this in a cricket ground before this. A ring of lights on top, as opposed to the standard tower floodlights – that brought on a certain vibe of its own! And as I looked around the stands, for the first time it sank in for real that this is how they were going to look by and large, come Sunday – empty.

We’ve all been talking about it all this while – an IPL without spectators in the ground. I’ve been catching up on some LIVE sport too – cricket, football, tennis – all behind closed doors. But to realise that all of us were actually going to be on that list of athletes who competed amidst a pandemic, was quite a surreal feeling, to be honest.

The longer build up to the tournament this year means all days of training aren’t that intense. Ricky ensures some days are optional too. It’s never optional for him though! Whether it’s a few of us, or the entire lot – the full coaching staff is always at the ground to oversee things every single day. And after all that hard work, it’s now time to countdown to the day we’ve all been waiting for. The day when we’ll finally be able to see other players without a barricade between us, and play a match.

The next time I write to you, I’ll be able to share what it felt like to play a match without a crowd, and hopefully with a few wins beside our name. Watch us, cheer for us, and support us from the safety of your homes, as we pad up to win this one for YOU!