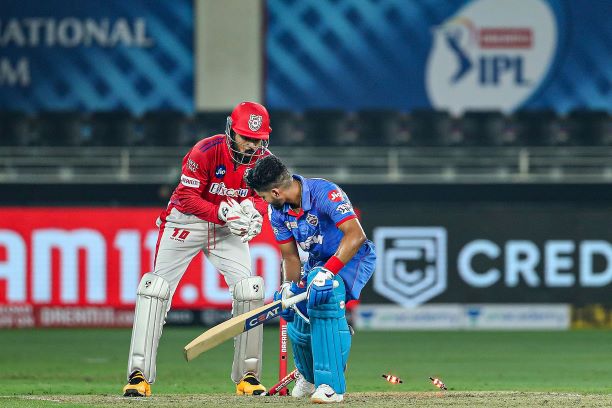 Australian batsman Marcus Stoinis stole the thunder from Mohammed Shami with a belligerent 21-ball-53 which lifted the Delhi Capitals to 157 for eight against Kings XI Punjab in their IPL match, here on Sunday.

The Capitals scored 57 runs in the last 18 balls with Stoinis producing a whirlwind knock that had seven fours and three sixes.

The pitch had a tinge of grass, the ball was swinging and pacer Shami relished the bowling on a helpful track.

His wicket-taking and run-choking act seemed to have made the difference before Stoinis’ outstanding hitting changed the complexion of the game in matter of minutes.

It was a pitch that required patience from the batsmen but reckless shots was how Delhi Capitals began after being invited to bat, with Prithvi Shaw (5) paying the price for his extravagance and Shimron Hetmyer (7) failing to check his shot.

Shikhar Dhawan (0) was run out to a horrible mix-up and the scoreboard was not a pleasant sight for the Delhi side at 13 for 3.

However skipper Shreyas Iyer (39) and Rishabh Pant (31) respected the conditions to raise 73-run stand for the fourth wicket while Stoinis’ knock towards the end put Capitals in a psychologically advantageous position.

Iyer launched into Gowtham for a massive six, first of the innings, in the ninth over, taking the run-rate to a modest five-an-over.

Iyer and Pant largely relied on singles to keep the scoreboard moving. Iyer took Gowtham to the cleaners in the 13th over, creaming off 15 runs with two well-measured straight sixes.

Suddenly, Iyer seem to be snatching the momentum and it forced Punjab captain KL Rahul to bring back his best bowler — Shami, who did not disappoint and got rid of Iyer. Delhi seem to be limping but Stonis rescued them.

India vs Pakistan LIVE: From Inzamam-ul-Haq to Virender Sehwag- Who said what? Check former players reactions

India vs Pakistan LIVE: From Inzamam-ul-Haq to Virender Sehwag- Who said...