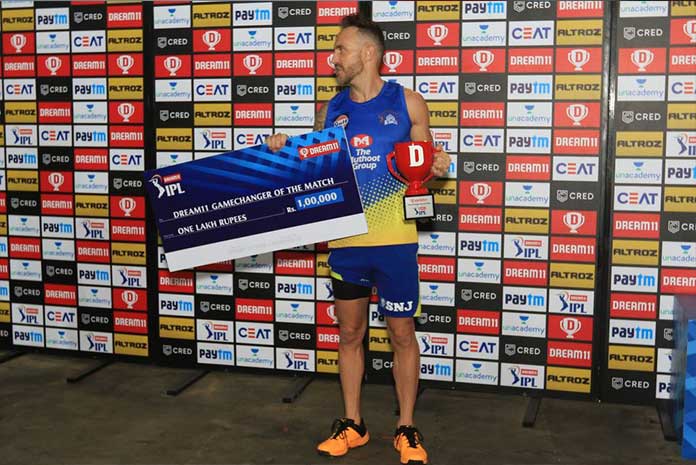 Mumbai Indians’ horror run in the UAE continues as Rohit Sharma’s men suffered their 6th straight defeat in the Middle East. The defending champions were handed an 5-wicket thrashing by Chennai Super Kings in the opening match of Indian Premier League (IPL) 2020 at the nearly-empty Sheikh Zayed Stadium in Abu Dhabi on Saturday.
It was a winning return for MS Dhoni who was back, playing competitive cricket for the 1st time in 437 days. it was the 3rd straight opening-day victory for Chennai Super Kings who had beaten MI and Royal Challengers Bangalore in their IPL 2018, 2019 campaign openers.
Dhoni, who had retired from international cricket on August 15, marshaled his troops well despite making some surprising calls by leaving out the likes of Dwayne Bravo and Imran Tahir for the campaign opener.
It was Chennai Super Kings’ dependable top-order batsmen, Ambati Rayudu and Faf du Plessis, who got the job done in chase of 163 with 115-run stand for the 3rd wicket. Rayudu hit a solid 71 in just 48 balls – his 19th IPL fifty while the veteran South African batsman, who was electric in the field, provided able support with a fifty.
Rayudu walked in when CSK were in a spot of bother, having lost openers Shane Watson (4) and Murali Vijay (1) inside the 1st 2 overs. Rayudu batted at No.4 on Saturday in the rejigged CSK batting order due to the absence of vice-captain Suresh Raina who had pulled out of IPL 2020.
Rayudu continued doing what he does best for CSK as he went after the Mumbai Indians bowlers.Rayudu and Du Plessis took their time to steady the innings after Trent Boult and James Pattinson jolted the CSK batting unit.
However, both Rayudu and du Plessis got into their groove, ably supported by Mumbai Indians fielders who were rusty after the long break enforced by the novel coronavirus pandemic.
Rayudu cared very little for reputations as he took on the likes of Jasprit Bumrah and Trent Boult while dominating spinners Krunal Pandya and Rahul Chahar. Rayudu and du Plessis added 115 runs for the 3rd wicket as they not just steered CSK out of trouble but took them closer to a win.
Reason 1 : Why Mumbai lost the first game ?
“Batsmen didn’t carry on once they got in like Du Plessis and Rayudu did. That’s something we failed to do. But credit to CSK bowlers, they kept us guessing all the time. Something for us to learn. Still early days, but credit to CSK. We all want to start really well, it’s crucial in this tournament to get that balance right.
Reason 2 : ‘We made too many mistakes’
“A few things for us to learn from this game, we made too many mistakes. Hopefully we can rectify those and come back stronger”
Reason 3 : “We failed to understand the wicket properly”
We’ve got to understand and adapt to the pitches. The pitch got Better towards the end It’s not that we’ve not played at bigger grounds. We’ve got to hit those gaps and make sure we get singles and doubles, it’s not just about hitting the shots. It’s all about understanding what one needs to do,” Rohit Sharma said.