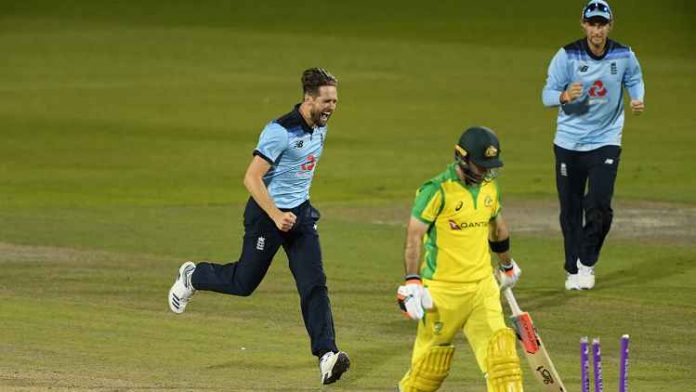 England’s bowlers answered every question asked of them to snatch an unlikely victory and level the series 1-1 as Australia capitulated in the second ODI at Emirates Old Trafford.

Chris Woakes and Jofra Archer gave England every hope of avoiding their first bilateral ODI series defeat at home since 2015 by claiming three crucial wickets each before Sam Curran chimed in with three wickets of his own after a staggering Australian collapse to seal the win and keep the series alive going into Wednesday’s final encounter.

Aaron Finch and Marnus Labuschagne put on 107 for the third wicket to build on the solid foundation set by Australia’s bowlers, who restricted England until a late partnership worth 76 between Rashid and Tom Curran gave the hosts something to bowl at.

Chasing 232 for victory after England had won the toss, Australia stumbled to 37 for 2 and then lost four wickets in the space of 21 balls – three of them to Woakes – to give England more than a sniff of the victory which had seemed so distant after their performance with the bat and again when Finch and Labuschagne were cruising.

Archer defied a used pitch which had been keeping low with devastating speed and bounce in an excellent five-over opening spell which delivered 2 for 22. He dismissed David Warner for a seventh time in international cricket with a scorching delivery up around the ribs which drew an edge through to Jos Buttler.

Archer hit Finch on the helmet but the blow failed to trouble the visiting captain who, having passed the necessary on-field concussion testing, settled back into his rhythm even in the face of another wicket as Archer struck again with a short ball that reared up and found the shoulder of the bat as Marcus Stoinis fended awkwardly and was caught behind. Finch and Labuschagne wrested back control until Archer and Woakes returned and wreaked havoc.

England brought in the Curran brothers for Mark Wood, who pulled up with a sore ankle, and Moeen Ali, left out in what Eoin Morgan described as “a tactical move”.

Those tactics came under the microscope on a pitch which rewarded Australia’s legspinner, Adam Zampa, whose 3 for 36 combined with some miserly bowling by the seamers had contained England so well. But the decision paid off amid Morgan’s masterful captaincy as England again stood up against huge pressure.

Zampa’s opposite number, Adil Rashid, was wicketless after his first three overs, having conceded 27 runs from them. Rashid returned from the opposite end only to be punished by Finch bringing up his half-century with a bottom edge through fine leg and a straight hit that sped through Rashid’s hands and all the way to the rope at long-off.

Both Currans had failed to make inroads up to that point, prompting the return of Archer and Woakes. Archer struck Finch another brutal blow on the chest but Finch shrugged it off by clipping the next ball to the leg side and running a swift two.

Labuschagne pulled Woakes gloriously for four and then brought up the 100-stand with Finch via a single off the next delivery. But Woakes made the breakthrough England so desperately needed when he dismissed Labuschagne lbw for 48 from 59 balls after England successfully reviewed umpire Michael Gough’s original not-out decision, sparking Australia’s collapse.

Mitch Marsh entered with Australia needing 88 from 20.1 overs, having scored 73 in the first ODI and an unbeaten 39 in a player-of-the-match performance as Australia won the third and final T20I. But when Archer had Marsh so flummoxed on the sixth ball he faced that he chopped on, the spring returned to England’s step.

They were positively jumping when Woakes bowled Finch for 73 as Australia lost a third wicket for just one run in the space of 11 balls. Archer had just completed his 10 overs with 3 for 34 when Woakes struck again next ball, bowling Glenn Maxwell for 1. From 144 for 2, Australia were 147 for 6 needing 82 runs from the last 15 overs.

With Archer and Woakes – who claimed 3 for 32 – bowled out, England turned again to Rashid and the Currans. It was Sam Curran who claimed two wickets in consecutive balls, bowling Pat Cummins and having Mitchell Starc caught behind as Australia crumbled further to 166 for 8.

Zampa survived the hat-trick ball but Sam Curran had the final say when he had Zampa caught by Archer to claim his third and put England within one wicket of triumph. Rashid claimed the last wicket when he had Alex Carey stumped off a googly as England won by 24 runs with eight balls to spare.

Australia were unchanged from their 19-run victory in the first match despite Steven Smith passing a second concussion test in a move Cricket Australia insisted was precautionary after he took a blow to the head during training which kept him out of that game.

Starc almost struck with the second ball when he had Jason Roy given out lbw to a delivery that pitched in line and nipped back in. Roy had the decision overturned on review when the DRS showed that the ball was going over the top of the stumps, but Starc made a breakthorugh a short time later with a ball that held its line and found the edge from a prodding Jonny Bairstow, caught behind for a duck.

He inflicted more pain when Joe Root attempted to drive and edged the ball hard onto his back knee, and when Roy was run out to a sniper-like throw from Stoinis in the covers, England were 29 for 2.

Root laboured to 39 off 73 before Zampa had him caught by Finch at first slip, putting England at 90 for 3. Root’s dismissal sparked a mini gear-shift from Morgan, who struck three fours in five balls from Marsh and Zampa, but when Finch changed up the attack with the re-introduction of Cummins, who struck with his third ball back to trap Buttler lbw for 3, England suffered another setback.

Zampa dismissed Morgan lbw for England’s top score of 42 and Sam Billings with a legbreak that was too full for the cut attempted by Billings, who ended up chopping onto his stumps and trudging off with just 8 from 28 balls. The hosts then lost Sam Curran and Woakes in quick succession, but Rashid’s rearguard 35 from 26 balls combined with Tom Curran’s 37 off 39 limited the damage.