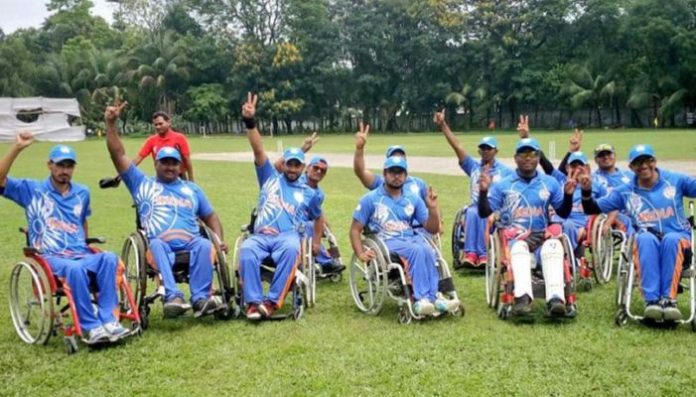 Not all cricketers, who wear the India jersey, are privileged. Especially, if they are disabled players, waiting for the BCCI to take them under its wings.

Then there is batsman Poshan Dhruv, who works at a welding shop in a village in Raipur. With Covid-19-forced lockdown shutting all businesses in March, he was forced to work as a farm labour for a meagre daily earning of Rs 150.

They are all proud India cricketers, having played a key role in national team’s recent success but are struggling because they are yet to come under the BCCI.

As per the reforms mandated by the Supreme Court-appointed Lodha Committee, the BCCI was supposed to create a committee for the development of physically challenged cricketers in India but the cricket board is yet to fulfil its constitutional obligation.

BCCI President Sourav Ganguly had also discussed the issue with the CEO of Wheelchair Cricket India Association some time back, according to Somjeet Singh, the captain of the Indian wheelchair team.

“There has been no communication with regards to policy formation for disabled cricketers. Sourav Ganguly had promised help. He did not have much idea about wheelchair cricket in India and he was surprised that we play at such a good level,” Somjeet told PTI.

The 24-year-old Somjeet, himself a paraplegic (suffering complete paralysis of the lower half of the body due to damage to spinal cord), played a key role in forming, first the UP wheelchair cricket association and then the national association with Squadron Leader Abhai Pratap Singh, who was an ex-Air Force fighter pilot and on wheelchair himself.

The cricketers feel that the way BCCI lifted the profile of women’s game in India, the parent body can help them too.

In the absence of a BCCI-recognised body, many associations have mushroomed at the state level, forcing wheelchair cricketers to shell out money from their own pockets to pursue the sport.

“When we went to Nepal we were asked to pay Rs 15,000 for the trip. It really broke my heart. Then I got attached with the association with which captain Somjeet is involved. They are taking care of us since then,” said Santosh, who is living of from some help provided by the Maharashtra government.

He gets a pension of Rs 1000 from the state government and his father and brother help him by giving him grocery.

“Our game can reach out to more people if BCCI helps us. The players can play better tournaments,” said Santosh, who did a course in two-wheeler repairing to support his family but is not getting any work due to the pandemic, added.

If BCCI helps them then the blind, deaf and wheelchair cricketers will all get benefited.

Somjeet said there are two associations, registered with ‘India’ name and if BCCI makes a clear policy, the ambiguity will end as to which one is authentic.

“There is recognition for para athletes but nothing for us. We also take pride in representing the country. These cricketers don’t want people to pity them. All they want is equal opportunity,” said Somjeet, who has been India captain since 2018.

Nirmal Singh, who has played against Bangladesh and Nepal, too said the same.

“I got to know about wheelchair cricket through Facebook. I cleared the trials, first for Punjab and then the Indian team last year. The game has given some hope to live a dignified life.

“We just want to make India proud and just need the basic support which only BCCI can give,” said 29-year-old Nirmal, who has two buffaloes and manages to earn Rs 4000 by selling milk.

He also engages in polishing furniture at times.

“What do I do, I have to support my mother. My younger brother is also not earning now. He went to Bahrain as a labourer and Covid-19 as made life tough for him and us.”

However, it seems the wait will be long for wheelchair cricketers to get some support from the BCCI.

“At this point, there are no sub committees in BCCI. The cricket for disabled will be a sub-committee of BCCI but it will take some time. The BCCI has already appealed to the Supreme Court for constitutional amendment. Let us get some clarity first,” said a BCCI official who did not wish to be named.

“The BCCI earlier this year had rewarded the physically challenged Indian team that won in England last year. Each playing member got Rs 3 lakh,” he said, making a point that they have tried to help disabled cricketers.