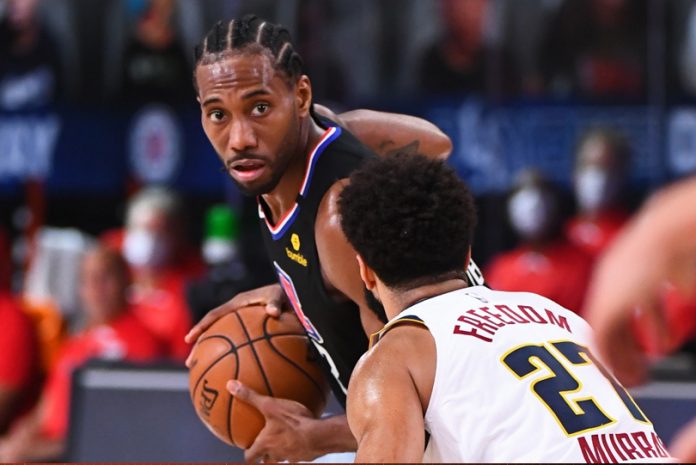 Paul George scored 32 points, Kawhi Leonard added 23 along with a big late block and the dynamic duo helped the Los Angeles Clippers rally in the fourth quarter for a 113-107 win over the Denver Nuggets in Game 3 of their Western Conference semifinal series Monday night.

Leonard did a little bit of everything as he grabbed 14 rebounds and dished out six assists. He also had two blocks, including one late on a shot by Jamal Murray at the rim.

Clippers coach Doc Rivers called a timeout to calm down the Clippers with 8:29 left and trailing 97-90. Fueled by defense, Los Angeles went on a 14-4 run to take a 104-101 lead. The Cilppers wouldn’t trail again.

Lou Williams sealed the win with a driving layup that extended the lead to six with 2:04 left. George turned in a torrid shooting night. He finished 12 of 18 from the floor, including five 3-pointers.

Nikola Jokic had 32 points, 12 rebounds and eight assists for Denver despite a sore right wrist that had him questionable before the game.

The NBA Eastern Conference Semi-finals series between Boston Celtics & Toronto Raptors can go to the wire.

Though the way Celtics crushed Raptors in the 5th game of the 7 match series, it can get over in the 6th game itself.

The game plan from Boston coach Brad Stevens was simple: Start things off with an increased effort on defense to set an immediate tone.

The Celtics did exactly as he asked — and put the reigning NBA champions on the ropes.

Jaylen Brown scored 27 points and the Celtics never trailed, rolling past the Toronto Raptors 111-89 in Game 5 of their Eastern Conference semifinal series on Monday night.

Boston now leads the series 3-2 and can earn a trip to the East finals on Wednesday.

“We were playing with great purpose,” Stevens said. “You could feel that from the get-go.”

“The job’s not finished yet,” Brown said. “We’ve still got a lot of work that needs to be done.”

“I know it sounds crazy .. but I thought our offense was awesome for like the first eight minutes,” Raptors coach Nick Nurse said. “I thought it was awesome. I don’t think those shots could have been more open.”

They were down 18-5 after all that, and it got worse in a hurry.

Another big scoring run — this time, 23-7 — in the second quarter pushed Boston’s lead from 37-25 to 60-32 late in the half. The Raptors had gone 5-for-6 from the field just before that spurt began and seemed to be getting in a rhythm; they missed 11 of their next 13 shots and things got out of hand.

“Tonight our defense really set up our offense,” Walker said. “It worked out for us.”

Toronto outscored Boston 28-25 in the third and it already didn’t matter; the Celtics’ lead was 87-63 going into the fourth.

“We just didn’t play crisp enough,” Lowry said. “We didn’t look at the rim early enough in the shot clock to attack. But it happens. Now we got to watch the film and make adjustments and play for our lives.”