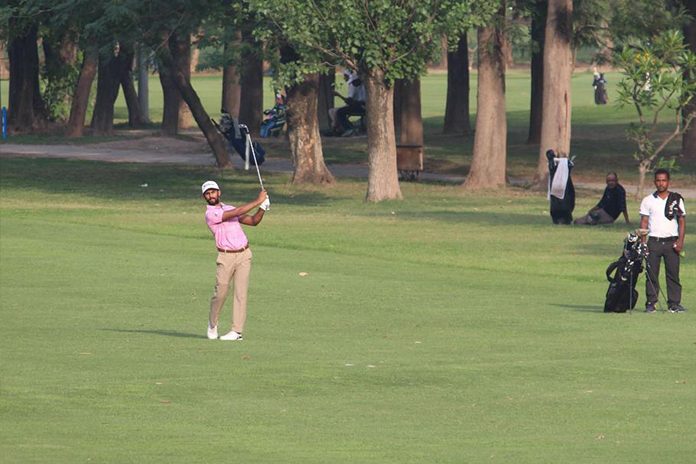 Bengaluru’s Trishul Chinnappa held on to the lead for the second day in succession but it was Greater Noida-based golfer Sudhir Sharma’s exquisite eight-under-64 that hogged the limelight in round two of the TATA Steel PGTI Players Championship, here Wednesday.

The 31-year-old Sudhir’s magnificent effort eclipsed the long-standing course record at the Chandigarh Golf Club (CGC) and saw him return to form after a long gap. On day two, Sharma climbed 44 positions to tied fourth at eight-under-136.

The second position was shared by Patna’s Aman Raj (68) and Bangladesh’s Md Dulal Hossain (68) at nine-under-135.

The previous course record of 65 was broken after 13 long years as it was first set by legend Mukesh Kumar in 2006. Thereafter, it was matched by the likes of Gaganjeet Bhullar, Gaurav Ghei, Ranjit Singh, Shiv Kapur and Chinnappa.

Chinnappa had equaled it on Tuesday during the first round of the ongoing event.

The cut came down at even-par-144 with 57 professionals progressing to the last two rounds.

Noida’s Gaurav Pratap Singh (67) and Kolkata’s Shankar Das (68) were both tied fourth along with Sudhir at eight-under-136.

Mumbai’s Anil Bajrang Mane slipped from overnight tied second to tied 10th at five-under-139 as a result of his 72 on Wednesday.

The trio of Yuvraj Singh Sandhu, Harendra Gupta and Aadil Bedi, were the best-placed among the Chandigarh golfers as they occupied tied 12th spot at four-under-140.

Jyoti Randhawa (71) was a further shot back in tied 19th.

Local amateur Sanju Kumar made a hole-in-one on the 14th during his round of 74. However, he missed the cut since he totalled six-over-150.