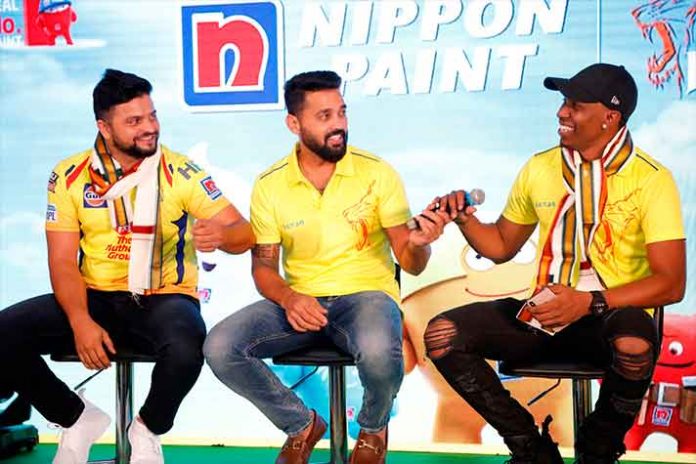 Some of the CSK players including Suresh Raina, Murali Vijay, Dwayne Bravo, Shane Watson, and Ambati Rayudugraced the occasion and met select fans. The lucky fans who got to meet the players are the winners of NIPPON FANTASY LEAGUE and the key channel partners of Nippon Paint from across India. The CSK team was joined by Mr. Mark Titus –Director Marketing, Nippon Paint (India) Private Limited (Decorative Division) in felicitating the winners of NIPPON FANTASY LEAGUE. The CSK players engaged the fans in a fun and interactive session, followed by a numerous group photos and selfies to the absolute delight of the fans.

More than 1200+ contestants had battled it out to earn the top 10 slots at NIPPON FANTASY LEAGUE. The contestants played in the league every day to earn the reward of meeting their favorite team CSK in a meet and greet. Fans from across the country participated in the contest which ran for the past few weeks. The top 10 winners were given an opportunity to meet their icons and were handed CSK merchandise by the players themselves.

Speaking about the event, Mr. S Mahesh Anand, President – Nippon Paint (India) Private Limited (Decorative Division) commented, said “CSK is the most celebrated team this IPL season and Nippon Paint as a brand, is proud to be associated with them. CSK’s phenomenal reach amongst fans was immensely reflected in fan’s participation in the NIPPON FANTASY LEAGUE. By facilitating this event, we wish to express our gratitude and support for the CSK players and fans alike. We are certain that fans made great memories interacting with their idols, having received a chance to meet them up close”.