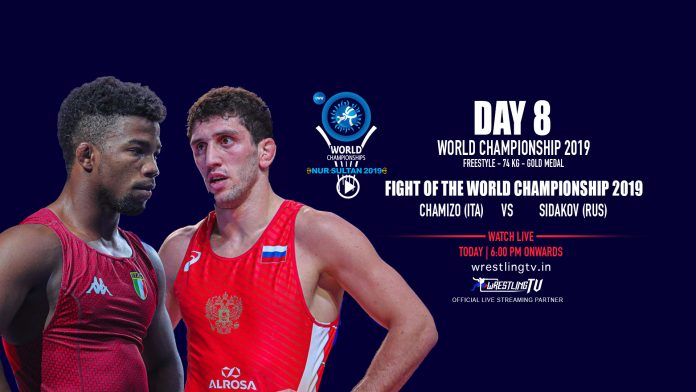 One is the current world number 1 & another one is reigning world champion and at stake is the world wrestling championship Gold Medal in 74 kg category. Wrestling match up cant get bigger than this.

It is showtime between current world number 1 Frank Chamizo of Italy & reigning world champion Zaurbek Sidakov of Russia live today on WrestlingTV.in @ 6 PM. Without any doubt, this is the fight of uww world wrestling championship 2019.

For Sudanov it is Deja vu all over again as he stopped Burroughs for 2nd year in row.
The defending champion Russian scored with one tick left on the clock for the second year in a row to end a bid by Jordan BURROUGHS of USA for a fifth world title at 74kg

This year, Sidakov’s late point for a step out came one round later than in Budapest, giving him a 4-3 victory in the semifinals. With this he got the right to challenge the two-time world champion Frank CHAMIZO in the final on Saturday evening at 6PM live on……