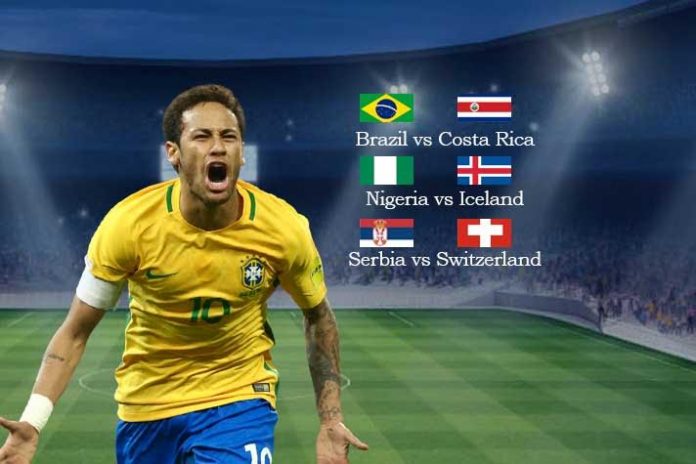 Neymar will ignore his injury concerns to take the field in Brazil’s crucial match against Costa Rica. The is some good news for the Brazilian football fans. The highest paid footballer ever, Neymar had endured 10 fouls as the Swiss had held Brazil 1-1 in their FIFA World Cup opening game.

There were serious injury concerns for Neymar as he had to limp out of the training session a few days ago after the match with the Swiss team. The Brazilian coach has confirmed that Neymar will figure in the starting line up today.

Brazil have been undefeated in their past 18 FIFA World Cup outings. What should be the more worrying factor Costa Rica that they have lost all their five encounters with Brazil till date.

Brazil will have been left reeling from their 1-1 draw with Switzerland on Sunday and will hope to improve when they meet Costa Rica in Friday’s early kick off.  For Brazil’s success, Neymar will be required to put up a special show. The

Costa Rica will be playing for their survival to the round of 16. Having lost their World Cup opener to Serbia, another defeat will deny them the passage to the next round.

There will  be expectations from Brazil to improve when they take on Costa Rica and get their World Cup up and running.

The first match of the day (Friday), starting at the Volgograd Arena with the Brazil-Costa Rica tie at 5:30 pm.

The Brazil and Neymar fans in India can catch all the action LIVE ON SONYLIV.COM. The streaming continues for the two more games at5:30 pm and 11:30 pm as Nigeria runs into Iceland and Serbia take on Switzerland in the last game for the day.

Here are the links for live action of all the three matches on Friday.

In the only Group D action on Friday, a charged up Iceland will take on Nigria. World Cup debutants Iceland will be buoyed by their valiant performance against Argentina as they will look to press for their maiden World Cup finals victory at the Volgograd Arena.

Iceland had performed brilliantly to hold Argentina to a 1-1 draw in their first ever World Cup match.

However, Iceland’s recent form isn’t great ahead of the Nigeria clash. Iceland have now drawn their last two matches and have failed to win any of their last five. That said, Heimir Hallgrímsson’s side have scored in each of their last four matches.

Nigeria too will be under pressure to uplift their performance. Their recent record is demoralising. Gernot Rohr’s side suffered a 2-0 defeat to Croatia in their opening World Cup match. The defeat is the Super Eagles’ fourth in five matches.

Defeat for Nigeria would confirm their elimination from the tournament, with a match to spare.

The two sides have only met once before, in a friendly in 1981. Iceland won the match 3-0.

In the wide open Group E Serbia and Switzerland face off in the last game scheduled for Friday.

Serbia had secured a comprehensive 2-0 win over Costa Rica to start the group stages with a bang, while Switzerland held Brazil with a 1-1 draw to frustrate the favourites.

As Brazil starts firm favourite in the first game for the day against Costa Rica, the winner of this game will almost be assured to progress to the next round with the Selecao.

SonyLIV is streaming the live action in all the six languages.