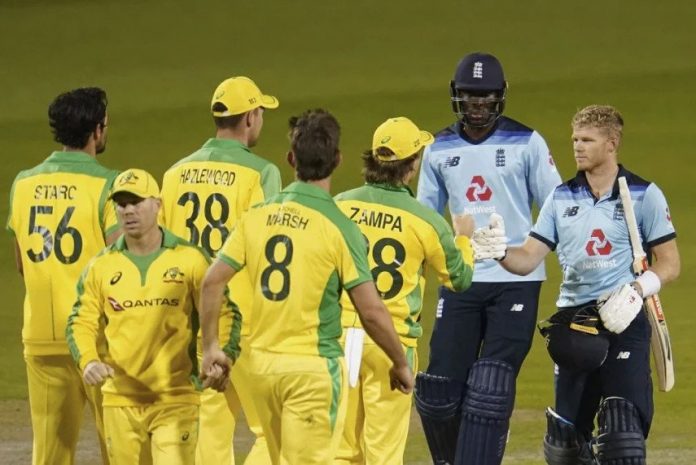 England slipped to their first series defeat of the summer as centuries from Glenn Maxwell and Alex Carey, and Mitchell Starc‘s final-over boundaries, led Australia from 73-5 to a gripping three-wicket win in the deciding third ODI at Emirates Old Trafford.

However, Maxwell (108 off 90) and Carey (106 off 114) profited from spurned England chances in a stand of 212 for the sixth wicket, before both batsmen fell towards the death, leaving Australia needing 10 from Adil Rashid’s final over.

Starc (11no off 3) smacked the first ball back over Rashid’s head for six and then swept the fourth away for four as Australia inflicted a first home ODI series defeat on their opponents since they triumphed 3-2 in 2015.

Maxwell had sealed an 84-ball second ODI hundred with a six off Tom Curran and although he was caught sweeping Adil Rashid in the 48th over with 18 runs needed, before Carey, whose maiden ODI hundred came from 106 balls, steered Jofra Archer to third man with 10 needed, Australia edged to victory.

That total looked like being enough when Australia lost half their wickets inside 17 overs but Maxwell – dropped on 44 by Jos Buttler off Adil Rashid – and Carey – caught off a Archer no-ball on nine – completed a stunning turnaround, with one of Maxwell’s seven sixes flying all the way into The Point in a thrilling end to the men’s international summer.