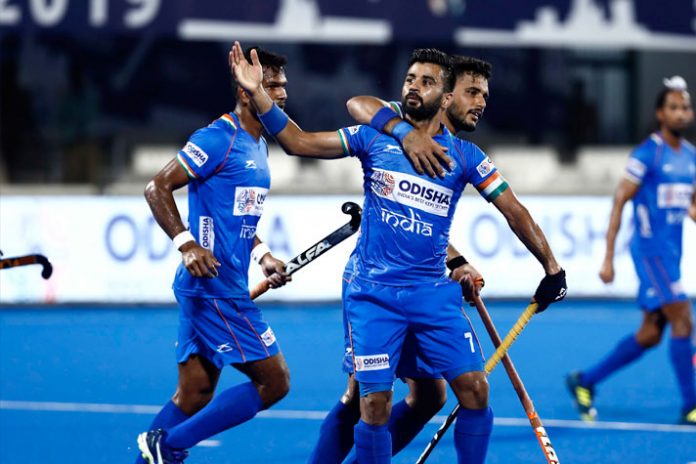 Skipper Manpreet Singh led from the front with a brace, guiding India to a hard-fought 3-1 win over Poland in the FIH Series Finals hockey tournament, here Friday.

After a barren first quarter, Manpreet scored in the 21st and 26th minutes while drag-flicker Harmanpreet Singh converted a penalty corner in the 36th minute as India registered their second consecutive win.

Poland’s lone goal was scored by Mateusz Hulboj in the 25th minute.

World no. 5 India were far from impressive, especially after thrashing world no. 21 Poland 10-0 in the Azlan Shah Cup less than three months ago.

India’s chief coach Graham Reid admitted that the hosts had an off day but said Poland are a much better team that what their ranking suggest.

“Poland are much better side than what we think, They are no.2 in the world in indoor hockey. We weren’t sharp today,” Reid said.

“We created a lot of opportunities but we didn’t have our best game. We missed passes and traps. We need to work on our sharpness.”

India captain Manpreet too agreed with his coach.

“We need to work on our basic skills and finishing,” he said

The Indians, as usual, were slow off the blocks as Poland got the first scoring opportunity in the form of a penalty corner in the very first minute but the opportunity went in vain.

The Indians then slowly and steadily got into the groove but the Polish defended in numbers to deny the hosts.

India’s first shy at the goal came in the sixth minute when Mandeep Singh teamed up with Akashdeep Singh to create a chance but the latter’s attempt was cleared off the line by Polish goalkeeper Maciej Pacanowski.

It took India 20 minutes to earn their first penalty corner but Harmanpreet Singh’s try was saved by the Polish custodian.

A minute later, India secured another penalty corner and this time Manpreet scored from a rebound after Amit Rohidas’ initial flick was blocked by Pacanowski.

Another short corner came in India’s way two minutes later but they wasted the chance while going for variation.

Poland stunned India in the 25th minute to draw level, courtesy a defensive lapse from Hardik Singh, who failed to stop Joseph Hillyer’s pass from outside the ‘D’ and got a deflection which fell in front of Hulboj and he made no mistake in slotting the ball home.

But Poland’s joy was short-lived as India restored their lead within a minute when Manpreet scored his second goal of the day after a fine one-touch play with Simranjeet Singh on the right flank to go into the breather leading by a slender margin.

The Indians earned another penalty corner minutes later but wasted the opportunity.

The third quarter was all about India’s misfiring forwardline as despite creating numerous scoring opportunities the strikers lacked in finishing.

India will next take on Uzbekistan on Monday, while Poland, who defeated the Uzbeks 4-0 in their opener, will face Russia on Sunday.