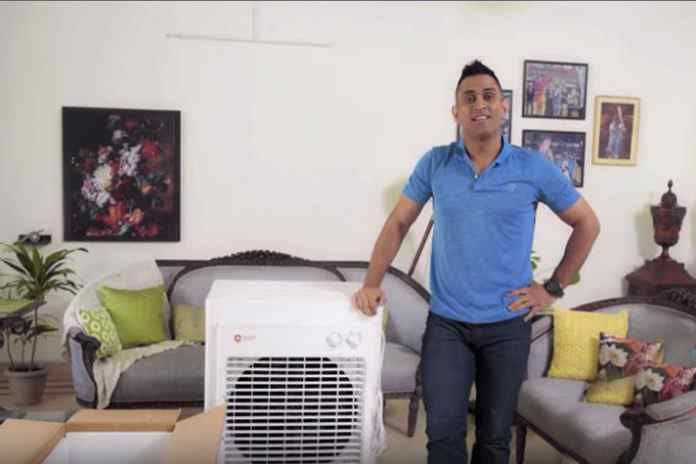 The man, who needed a little girl to explain to him what PSPO was, who has been at the receiving end from gen-next, is now promoting as a genius India’s first modular outdoor desert cooler.

Mahendra Singh Dhoni, extending his brand promotion duties for Orient Electric, has featured in a one-minute 32-second video to promote what the company claims to be the first modular outdoor desert cooler in India. The former Indian cricket team captain who has been seen being educated by his “on-screen niece” in all the earlier Orient Electric TVCs, for once has played smart on screen – explaining how the modular cooler can be assembled in a mere 90 seconds.

To establish the cooler’s modular advantage, the brand challenged its long-standing ambassador Dhoni to assemble the Desertstorm air cooler in 3 minutes. Interestingly, he not only enjoyed the challenge but also completed it in 90 seconds. In the video, Captain Cool challenges the audience to participate in the contest to beat his time and get a chance to meet him. The video has so far garnered close to 1.3 million impressions and 260,000 views.

While being a very effective and economical home cooling solution, the current breed of outdoor air coolers are generally clunky, roaring monsters and take a lot of space for storage when not in use. Identifying the consumers’ true need gap, Orient Electric has come up with a breakthrough innovation with India’s first rust proof – metal bodied, modular outdoor air cooler, Orient DesertStorm.

Orient DesertStorm can be assembled and dissembled in a jiffy and can be easily transported in the car boot, and easily stacked and stored when not in use. It is also the first ever branded metal cooler that takes evaporative cooling to a whole new level, thanks to its fan blades with AeroFan technology that ensure longest air delivery with low operating noise, Honeycomb cooling pads with DenseNest feature for 25% more cooling, and advanced water distribution system.