Call of Duty Black Ops Cold War Season 5 Reloaded: New content coming with the brand new update on 7th September. Call of Duty Black Ops Cold War Season 5 reloaded is set to release on September 7 at 9 PM PT, Season Five Reloaded introduces a variety of free content in Multiplayer and Zombies, with The Numbers Event delivering content across both games later in the season. From a reimagined overhaul of Warzone Rumble known as Clash to a new functional Melee weapon, the fight rages on in the ‘80s as we prepare for the upcoming sixth season in Black Ops Cold War. This – and much more – arrives in Season Five Reloaded. Here’s what you need to know:

Unleash the Beast Within – Zoo Arrives in Multiplayer

There’s no cage that can hold you from the fight ahead. First seen in the original Black Ops’ Escalation DLC pack in 2011, Zoo is a medium-sized map specifically designed for 6v6 game modes in Black Ops Cold War, trimming the playable space down to its main animal exhibit and park area for Multiplayer.

Be sure to take a “ride” on the monorail to get an incredible vantage point on the action below, or head to the souvenir shop to dole out plenty of free pain to your enemies. Jump into the action with the dedicated Zoo 24/7 Featured Playlist at the launch of Season Five Reloaded.

After a hiatus since Season Three of Modern Warfare in 2020, Demolition is back for Black Ops Cold War!

First introduced in Call of Duty: Modern Warfare™ 2 (2009), this game mode is akin to a respawn-enabled, amped-up Search and Destroy. In Demolition, one team of attackers attempts to destroy a pair of bombsites while defenders must prevent the detonations.

All-out chaos ensues when time is extended after the first bomb site is destroyed, and both teams have a chance to play offense and defense before the match ends. If there is a tie, expect even more madness: a single neutral bomb site becomes active, with the first team to detonate it winning the match. 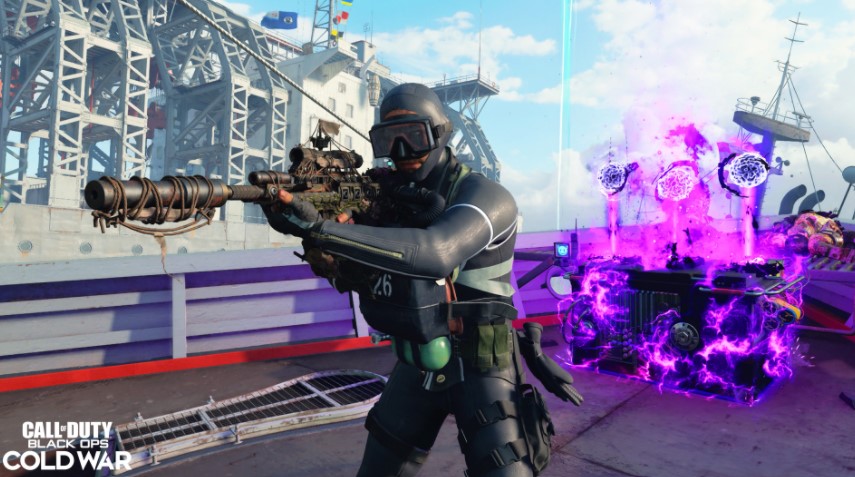 Agents of Requiem have even more to explore once Season Five Reloaded arrives, including a new Outbreak Region in previously uncharted waters for Zombies.

Located in the North Atlantic Ocean, Armada was the site of NATO and Warsaw Pact skirmishes over a sunken prototype nuclear submarine. With the Dark Aether spreading into the Atlantic, it seems nuclear armaments weren’t the only volatile element in the area. A dimensional rift has caused an intense energy spike, making the area rich in Aetherium Crystals, Essence… and the ravenous undead.

Expect to take on Objectives and World Events on the high seas in this new Region custom-tailored for Outbreak, including a new World Event for those looking to bolster their loadouts.

Across the Outbreak Zones, Requiem is reporting the presence of a new chest type alongside the usual small, medium, large, and golden varieties: the mysterious Black Chest.

Much like previous World Events found throughout the Regions, the exact details of this event are for Requiem agents to discover. Once they do, they may find the reward far outweighs the risk…

Operators heading back into round-based experiences to complete those Season Five Challenges will also find a new feature to ramp up the action from the very start: the Rampage Inducer.

Appearing as an orange Essence canister in the starting area, the Rampage Inducer will temporarily ramp up the difficulty to Cranked-level proportions if all members of a squad agree to take on the challenge. Once activated, this canister will speed up zombie spawn rates and cause all zombies to sprint endlessly until Round 20, turning up the action until the second major round milestone is reached… or a total squad wipe long before then. Call of Duty Black Ops Cold War Season 5 Reloaded:

PlayStation Operators – don’t be left in the dark in Season Five Reloaded.

Onslaught receives a new map and narrative Intel with Onslaught Drive-In, as well as a new limited-time mode: Diminishing Light, a hectic twist on the traditional formula where the circle shrinks over time. If the Orb collapses on itself, it will implode and destroy you and your duo partner – shoot it to slow down the shrink rate or collect clock power-ups to pause the collapse.

Completing Surges will revert the Orb to its original size, and these are key to earning a brand-new Weapon Blueprint. Those who conquer 30 Surges in this limited-time mode will earn the “Soviet Red” Legendary Assault Rifle Blueprint (shown above), which is based on the reliable AK-47 rifle and features plenty of high-level attachments. Call of Duty Black Ops Cold War Season 5 Reloaded: