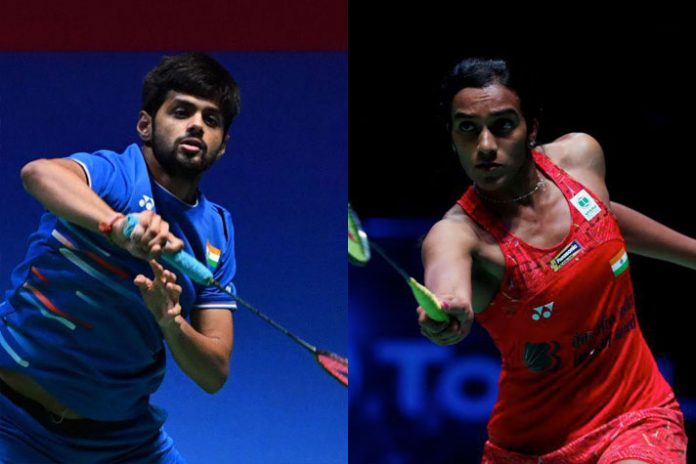 P V Sindhu secured her fifth World Championships medal following a stunning comeback while B Sai Praneeth became the first Indian male shuttler in 36 years to grab a podium in the prestigious event here on Friday.

On a day of double delight for India, Olympic silver medallist Sindhu staged a come-from-behind victory over Chinese Taipei’s Tai Tzu Ying, before Praneeth ended an agonising wait with a straight-game win over Indonesia’s Jonatan Christie.

Sindhu, who won back-to-back silver medals in the last two editions of the tournament to go with her two bronze, edged past world number 2 and Asian Games gold medallist Tzu Ying 12-21 23-21 21-19 in a pulsating contest that lasted 71 minutes, inching closer to an elusive gold medal at the worlds.

World No. 19 Praneeth, who got the Arjuna Award this year, notched up a 24-22 21-14 win over Asian Games gold medallist Jonatan in a 51-minute battle, joining Prakash Padukone in the medal list at the tournament.

Padukone was the first Indian to win a men’s singles World Championships medal — a bronze — in the 1983 edition.

In the women’s singles, Sindhu showed tremendous grit after being blown away in the opening game, edging past her fancied rival, who enjoys an upper hand (10-4) after 14 career meetings.

“I think in the first game, I had given a huge lead and I couldn’t cover. I was prepared for her deception but my shots were going to mid court. But the second game was anybody’s game and I kept fighting and won the second. The third game went same way, she was leading but I had hope. At 18-18, I had to be patient and keep the shuttle inside, there were long rallies ad I am happy to win this,” Sindhu said after the win.

“We keep playing each other, so we know each other’s game. I needed to be positive. It was a really good match and taking out such close matches gives a big boost to the confidence and I hope I can prepare well and come back stronger tomorrow.”

The 24-year-old Indian will take on the winner of the match between China’s Chen Yu Fei and Denmark’s Mia Blichfeldt on Saturday.

“I don’t know whom I will play. Chen Yufei is doing well in recent times and Mia has beaten Saina yesterday. I will be playing them after a long time. Anything can happen, I just have to be there and focus on tomorrow’s match,” Sindhu said.

In the men’s singles quarterfinals, Praneeth, who had won the Singapore Open in 2017 and finished runners-up at Swiss Open earlier this year, came into the tournament with a 1-2 head-to-head count against the Indonesian.

But the past record didn’t matter as the Indian came out attacking to stave off a stiff challenge from Jonatan in the opening game and then blew him away in the second to find his place in history.

“It feels awesome. It feels great and I am happy to win today. I still have matches, so I have to focus on that and be fitter for tomorrow. We can talk about what medal later on,” laughed Praneeth after the match.

Talking about the match, Praneeth said: “In the first game, the rallies were going on really long and I was attacking a lot and there was a lot of pressure and it made me tired. It was crucial because if he would have won then it could have been different.

“Later Gopi sir told me not to attack and that changed the rhythm and I think those inputs helped me a lot.”

Praneeth will take on World No. 1 Kento Momota of Japan in the semifinals on Saturday.

“I think everybody is trying to find a way to beat him. It is not easy he being the world no 1. You have to put him under pressure, so lets see how it goes. I will give my best.”