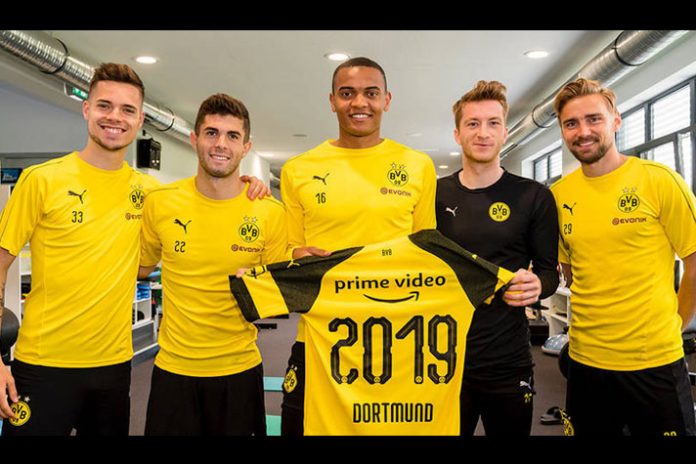 Borussia Dortmund, In cooperation with Amazon Prime Video, will produce a four-part documentary series to give both the club and all football fans around the world an unprecedented, unvarnished behind the scenes view of the leading German football club and to recall the emotions of a season full of unforgettable moments.

The documentary series is being directed by award-winning German filmmaker Aljoscha Pause (Being Mario Götze; Tom Meets Zizou – Not a Midsummer Night’s Dream; Trainer!) and will be released exclusively on Amazon Prime Video in over 200 countries and regions on August 9, shortly before the start of the new Bundesliga season, Borussia Dortmund (BVB) have stated in a Press release.

“Aljoscha Pause and his team very quickly felt like part of our squad.”

Fan favourites and top players like Marco Reus, Axel Witsel and Roman Bürki, as well as Borussia Dortmund CEO Hans-Joachim Watzke, Sport Director Michael Zorc and head coach Lucien Favre feature in the documentary. Never before have the cameras been granted such comprehensive access to all areas of the dressing room and the players’ personal lives. While the current season is the main focus of the series, it will also cover the most significant victories and defeats in BVB’s past, including hearing from club legends such as Jürgen Klopp, Ottmar Hitzfeld and Matthias Sammer.

BVB Managing Director Carsten Cramer said: “In a season full of excitement right to the very end, we exceeded all our expectations – we can be rightly proud of that, and of what we will be able to show Amazon Prime Video users from mid-August about the season that has just ended and the history of Borussia Dortmund. Aljoscha Pause has once again showed his incredible filmmaking talent and has succeeded not only in discreetly producing a fascinating insight into the everyday goings on at a football club, but also in showing BVB how it really is: authentic in its raw emotions, sometimes over the moon with joy, sometimes bitterly disappointed, but always ready to bounce back from one moment to the next. But my compliments also go to the team and to all those involved in making this unprecedented proximity possible from day one.”

BVB captain Marco Reus is in no doubt: “I know I speak on behalf of my teammates when I say that it was exciting to be observed over a long-term period like this – Aljoscha Pause and his team very quickly felt like part of our squad as we celebrated victories and processed defeats together. Although ultimately we just missed out on our dream of winning the German championship, I am still very much looking forward to the finished documentary.”

CEO of Amazon Prime Video Germany Dr. Christoph Schneider said: “We are thrilled that we have this opportunity to work alongside BVB to offer sports fans around the world a unique insight behind the scenes at a club that can boast one of the proudest traditions and biggest international fanbases in Germany, and we look forward to adding this exciting new series from renowned filmmaker Aljoscha Pause to our collection of award-winning documentaries and range of live sports programming for a global audience to watch exclusively on Prime Video.”