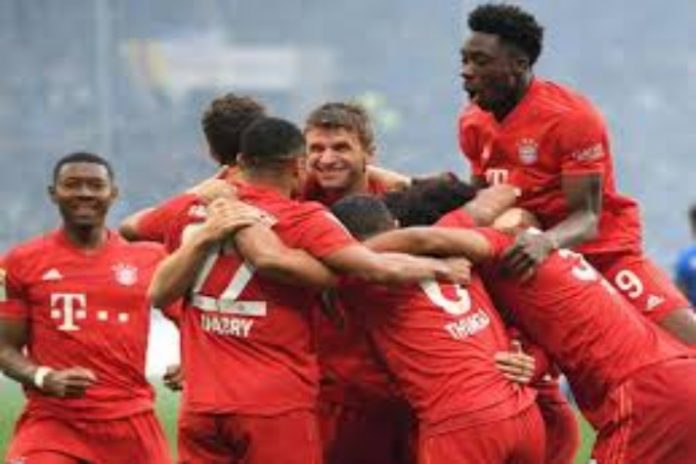 Bayern Munich beat Eintracht Frankfurt 5-2 on Saturday, surviving a brief second-half comeback scare to stay four points clear of Borussia Dortmund at the top of the Bundesliga with seven games left to play.
Bayern, chasing a record-extending eighth straight league crown, next face Dortmund in the league’s big game on Tuesday and victory there would send them seven points clear.
The Bavarians thought they had the match wrapped up after efforts from Leon Goretzka, Thomas Mueller and Robert Lewandowski had given them a 3-0 lead in the empty Allianz Arena.
Eintracht defender Martin Hinteregger caught the Bayern defence napping to strike twice in three minutes and inject new life into the encounter.
Yet the visitors quickly gave away two goals — with Alphonso Davies pouncing on a defensive error on the hour and Hinteregger scoring an own goal in the 74th minute.
Bayern, who had club great Franz Beckenbauer watching from the stands in a rare public appearance, are on 61 points with Dortmund on 57 following their 2-0 win over VfL Wolfsburg.
“I was happy with the first half. We wanted to dominate and we did that,” Bayern coach Hansi Flick said. “At 3-0 maybe we were mentally already done with the game. Against Dortmund we want to keep a clean sheet.”
The Bundesliga resumed last week, with no fans in attendance, after being suspended for more than two months due to the COVID-19 pandemic.
It was the first match to be played without fans at Bayern’s home ground but the champions looked unaffected as Mueller set up their first goal with his 17th assist of the season and grabbed the second himself.
Poland striker Lewandowski, chasing Gerd Mueller’s 40-goal record haul from the 1971/72 season, headed in his 27th of the campaign a minute after the restart before Hinteregger’s two-goal scare.
But Bayern kept their cool for their 12th win in their last 13 games that kept them favourites for the title.
Dortmund were far from their best in their 2-0 win at Wolfsburg and are hoping defender Mats Hummels can recover from a heel injury, that forced him out at halftime, for Tuesday’s game.
Kai Havertz scored a brace for the second match in the row to lead Bayer Leverkusen to a 3-1 win at Borussia Moenchengladbach as they leap-frogged their opponents to go third on 53 and take the upper hand in the battle for a Champions League spot.
RB Leipzig, on 51, travel to Mainz 05 on Sunday and will push Gladbach to fifth with a win.