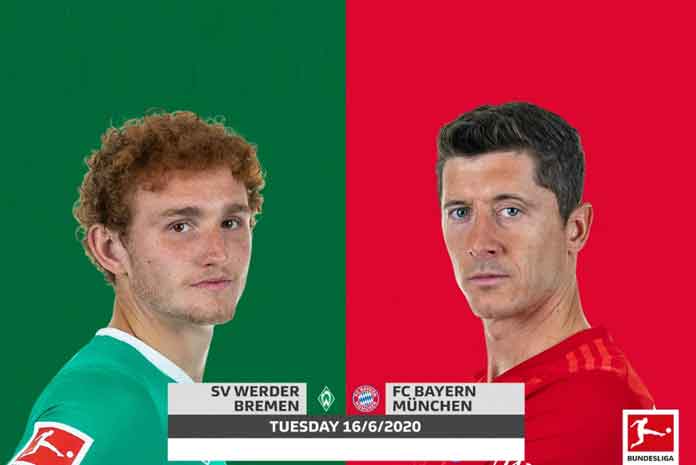 Robert Lewandowski and Thomas Müller return from suspension as Bayern Munich try to get the title over the line against Werder Bremen.

Werder Bremen are on the brink of relegation but they should not expect any rescue gifts from Bayern Munich when they meet on Tuesday with the Bavarians eyeing their eighth consecutive league title.

Bayern will secure the league crown for the 30th time if they beat former domestic rivals Werder in Bremen. Borussia Dortmund are seven points behind in second place with three games remaining.

“We want to be champions on Tuesday,” Bayern Munich coach Flick told a virtual news conference on Monday. “We are not giving away any gifts to Werder. We want to reach our goal on Tuesday and it is up to us.”

Clashes between Bayern and Werder used to be fierce when both were vying for the championship, with the Bremen club winning the last of their four Bundesliga crowns in 2005.

Bayern will have leading scorer Robert Lewandowski and top provider Thomas Mueller back from suspensions.

Werder, who have been in the Bundesliga longer than any other club, are in 17th place, level on points with Fortuna Duesseldorf, on the relegation playoff spot.

“I think that Werder will try to close down spaces. They are keeping calm and they are backing their coach. That’s important,” Flick said.

Werder have won three of their last five league games to give themselves hope of Bundesliga football next season as the club backed coach Florian Kohfeldt.

“They have managed to get back in contact with the playoff spot. They earned points in recent weeks so all is still possible for Werder,” Flick said.