Kyrie Irving Injury, Nets vs Bucks in NBA Playoffs: With James Harden upgraded to doubtful for Game 5, it is possible that Kyrie Irving might miss the rest of the series.

After an injury to the Nets’ 3rd superstar James Harden in Game 1, Kyrie Irving has left the match in Game 4.

ESPN’s Adrian Wojnarowski reported the Nets do not expect to see Irving back on the floor against the Bucks but are increasingly optimistic about James Harden’s status.

Harden went through shootaround Tuesday morning to test his injured hamstring and is “hopeful” to be back in the lineup for Game 5, which tips off at 8:30 p.m. ET.

.@Rachel__Nichols provides an injury update on Kyrie Irving, who will miss the rest of Game 4 due to a right ankle sprain: pic.twitter.com/P8LjkSVBfG

Kyrie Irving down on the court with an apparent ankle injury after landing on Giannis’ foot.

He was able to walk on his own to the locker room. pic.twitter.com/wzBJdeZ0DA 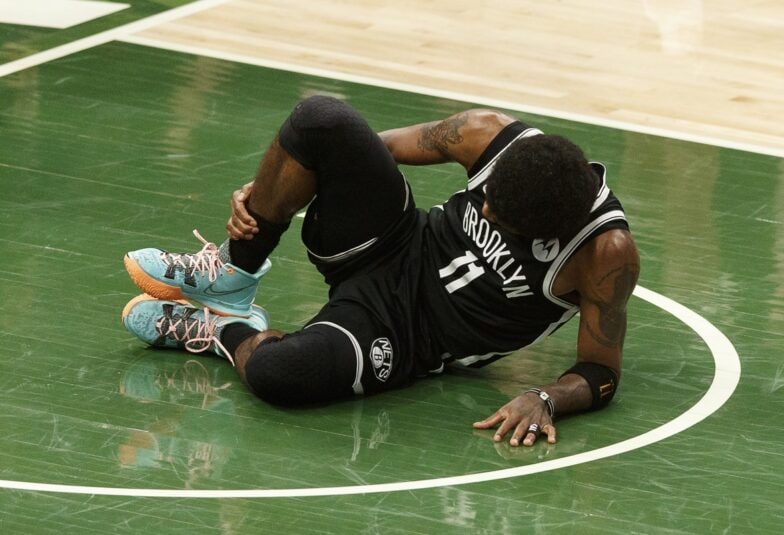 “I don’t think there’s a great expectation that he can turn this around and be ready for Game 5,” Wojnarowski reported.

He noted James Harden has made “progress” in his recovery from a hamstring injury, but he could also miss the game Tuesday. After Irving was ruled out, Nash would only say he had “no update” on Harden’s status for Game 5 in Milwaukee.

Irving is one of the best offensive playmakers in the league as a seven-time All-Star who can break down opponents off the dribble, hit from the outside, and facilitate when defenders collapse on him.

Harden had missed two games in early April because of his right hamstring. He came back and played against the New York Knicks before dropping out of the game with an exacerbation of his injury.

His hamstring issues began at the end of March when he dealt with tightness in the muscle, but he only missed two games originally. He lasted four minutes in his return on April 5 and was sidelined, but on April 20 it was announced he would be out indefinitely.

James Harden remains out for Game 4 between the Nets and Bucks (Sunday on ABC), Steve Nash says. Harden is “progressing” Nash says.

Jeff Green has been upgraded to questionable for Game 4, Nash says.

Harden missed Games 2 and 3 as well.