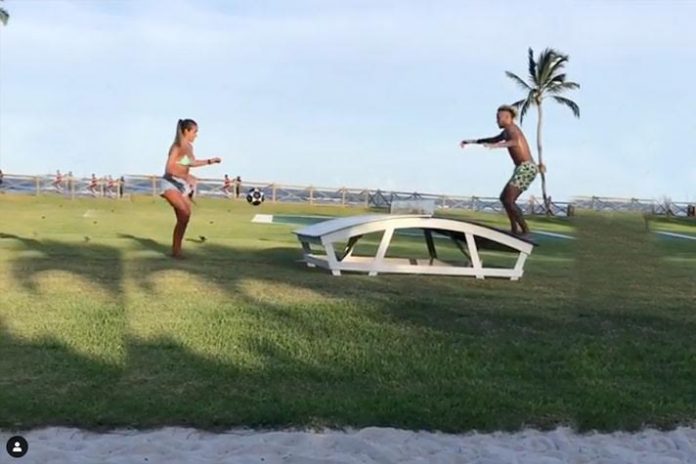 Meet Natalia Guitler – the women’s footvolley’s world champion, who famously beat Neymar (Jr) in a game of ‘teqball’ and has the likes of Ronaldinho and Zico in her several million strong fan club. The Brazilian girl does things you couldn’t even dream about. She has been a professional tennis player too.

The ingenuity and artistry of the 31-year-old Natalia would invoke the praise a ‘Magic’ Johnson would have on NBA courts, John McEnroe on the Acrylic fibers of Flushing Meadows, ‘Prince’ Naseem Hamed inside boxing rings, Viv Richards on cricket creases and Ronaldinho on Camp Nou grass.

One of Brazil’s best kept secrets until last year, Natalia’s fame today may be gauged from the fact that football’s world governing body FIFA has attributed an article of its official website to this beach volleyball player.

“Last year I played in the Teqball World Cup,” she told FIFA.com. “It was my first teqball tournament. It was open to men and women, but there were only three women out of 80 people involved in the doubles.

“When I got there, people didn’t say ‘hello’, looked at me like I shouldn’t be there – I didn’t feel respected. This happens a lot outside of Brazil – judgement. As a woman, you don’t start with respect, but have to earn it.

“But then we started winning and people were like, ‘Ok, she can play.’ Me and my partner Marcos Vieira came fourth. By the time I went home people were asking to train with me, being nice. I felt like I had earned credibility, broken taboos.”

Natalia finished 2018 at Neymar’s holiday home in Bahia. She ‘thanked’ him for the invitation by edging him in a teqball match. “It was really close,” says Natalia. “I ended up winning by a very small margin. He has enormous talent. It was such an honour for me. Neymar’s such a nice person, humble. He made us feel so welcome.”

Amazingly, teqball is only Natalia’s second football spin-off – she is the reigning singles and doubles world champion at footvolley. And even more amazingly, footvolley wasn’t even Natalia’s first sport.

She has travelled the world as a professional tennis player and being a Brazilian her first sporting encounter naturally was on a football field.

Also Read: Neymar agrees on pay cut to be back with Barca: Report

LaLiga boss not happy with Barcelona bringing back Neymar