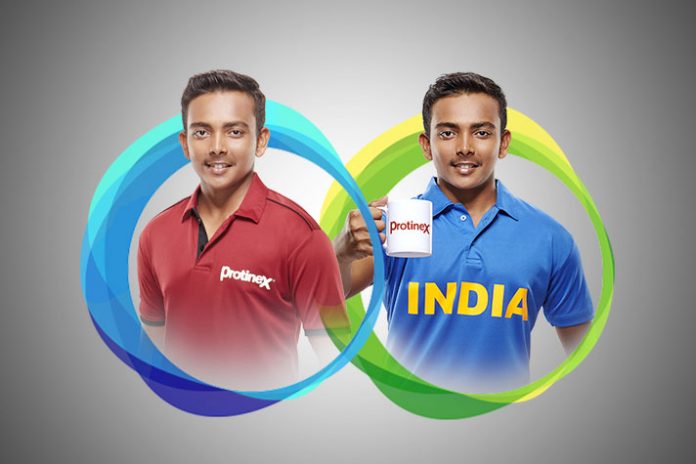 Prithvi Shaw has given nutrition brand Protinex a strong reason to celebrate of its best marketing initiatives.

Protinex was among the majority to recognise the potential and power of Prithvi as the French multinational Danone group brand had signed Indian cricket’s most promising prodigy of his era as its brand ambassador earlier this year. The boy whose marketing potential was recognised for his heroics as an Indian colts’ team leader has walked into the men’s league with an authority at the very first opportunity.

Protinex celebrated its brand ambassador’s success as Shaw became the youngest Indian to score a hundred in his test debut match against West Indies.

“It’s a proud moment for brand Protinex. We salute Prithvi for his huge achievement. Being a sportsman, it’s very important to stay fit and maintain good muscle health. We signed up Prithvi as our brand ambassador as he resonates well with our brand’s promise of providing a healthy solution for an active lifestyle & good muscle health. We would like to congratulate him for his achievement and wish him luck for his future endeavours,” said Himanshu Bakshi, Managing Director, Danone India.

In India, Danone has started its nutrition business in 2012 through the acquisition of the nutrition portfolio from Wockhardt Group. Danone’s life nutrition business embodies a holistic nutrition approach offering a full range of products for pregnant mothers, infants, young children as well as adults, under recognized brands like Aptamil, Neocate, Farex, Protinex, Dexolac and Nusobee.

Protinex has a five-year deal with Prithvi that will see him driving the brands marketing campaigns and initiatives.

Also Read: Under 19 cricketer Shubman Gill is face of Protinex