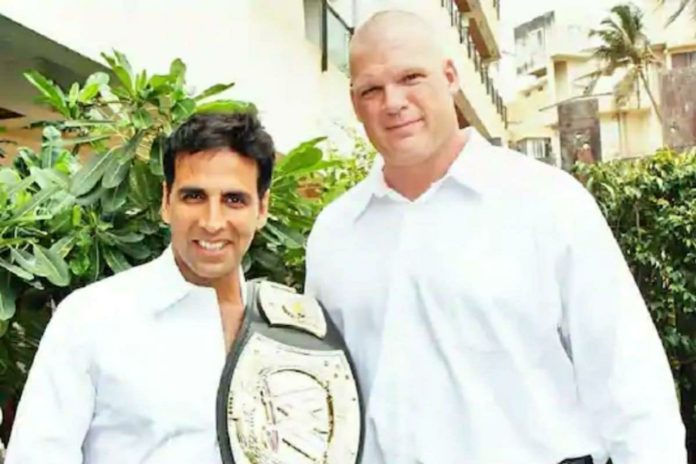 Many years ago, Akshay Kumar met his match in WWE superstar Kane. Back in the year 2009 when Kane was in India, the Khiladi of Bollywood had invited him over to his house in Mumbai. The wrestling idol turned up to meet the actor and his family at his Juhu residence.

Akshay’s son Aarav is a huge fan of the wrestling legend. It was reported that the then six-year-old was so excited to meet his icon the following day that he was sleepless through the entire preceding night.

Kane reached Akshay’s place dressed in jeans and a white shirt nothing like his wrestling arena’s ‘The Big Red Monster’ look. Akshay too, like a sport, twinned his outfit to coordinate with Kane but nothing could match up the wrestling star’s 7 ft height. While posing for a picture, Akshay requested Kane to cover up as it would not be possible for him to compete with his tall frame.

Here is a picture of the two stars: 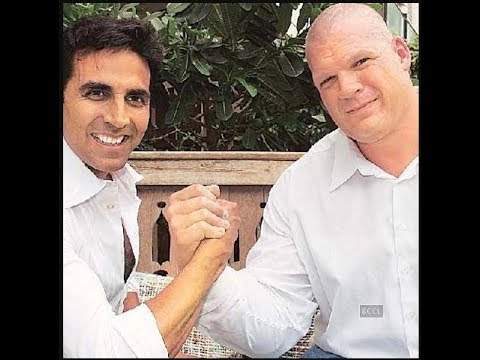 Interestingly, the two stars are the same age and are both fans of Jackie Chan. Kane compared Akshay to biggest superstars to express his admiration for the actor. He said Akshay is like Sylvester Stallone or Arnold Schwarznegger of India.

Akshay and his wife Twinkle had prepared an impressive array of meals to welcome their guest of honour. In addition to bacon, omelette, mango shake, they had served Kane with aloo parathas The fascinated kids — Aarav and Twinkle’s sister Rinke’s four-year-old daughter —took fright when it came to tackling the huge man mountain. Aarav told his mother that Kane would perform his signature move on him, which is the chokeslam.

Akshay’s son has also trained in mixed martial arts like his father and takes great interest in various athletic activities. Currently Akshya is in the UK-Scotland with his family to complete shooting for his upcoming film Bell Bottom.