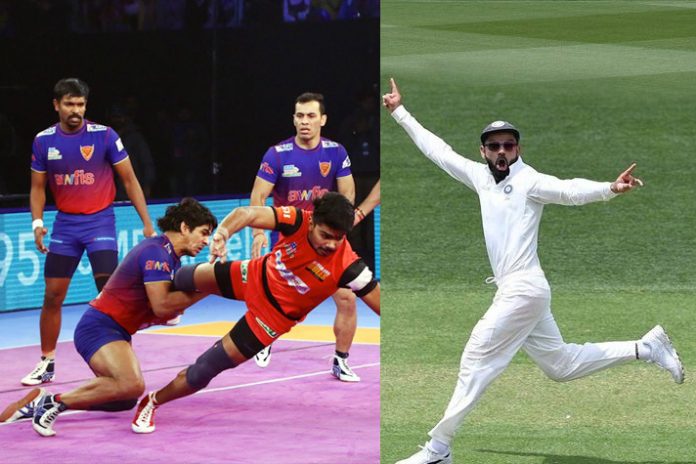 It is a severe blow to cricket’s image. In a direct competition with the live broadcast of Indian cricket team’s Adelaide Test against hosts Australia, kabaddi completes a clean sweep in the top five positions for the most watched sports genre programmes on Indian television.

Never in the history of Indian television, any other sport or sporting event has attracted more eyeballs or impressions than the live broadcast of a cricket match involving India.

Cricket in the Adelaide Test was exciting on all five days with an intriguing duel between the bat and the ball. But it failed to live up to its billing of being the most preferred sports content on Indian television. It does not happen just for the opening day when Cheteswar Pujara put down the anchor to score a classy century. But for the second day, too, when Indian bowlers reigned in the home team.

No session over the two days could attract enough audience to meet the number of people who watched live kabaddi on Star Sports First and Star Sports 1 Hindi.

“This is a delightful aberration for sure,” says Harish Bijoor, brand and business strategist and owner of Harish Bijoor Consults Inc. “Kabaddi needs a whole bunch of these ratings to make itself that mega sport.”

The top five sports genre shows between December 1 and 7 in the Broadcast Audience Research Council ratings are the live broadcast of Pro Kabaddi and the most watched channel is free to air Star Sports First, primarily on the strength of kabaddi.

The turn-around may be attributed the broadcast timings. The Test matches in Australia start early in the morning, while kabaddi is broadcast during the evening Prime Time. The broadcasters approach matters, too. Star Sports has attributed the best broadcast quality and channels to kabaddi. The marketing is aggressive.

Star India, also the key stakeholder Pro Kabaddi, has attributed the best resources, has committed the best possible broadcast screens and marketing plan to elevate the league. The longer Pro Kabaddi phase has entered the decisive knockout phase. This brings the best out of the teams in the must-win-scenarios for survival.

The audience data for the remaining three days of the first Test when India pressed for their maiden win in the inaugural Test Down Under will potentially put cricket in its traditional number one phase. But kabaddi with this one exception has re-established itself the fact that India’s rural sport hold tremendous commercial and television potential.