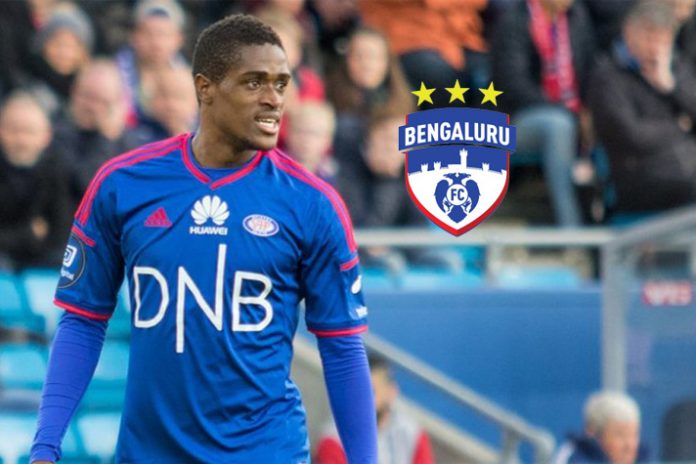 Bengaluru FC on Wednesday signed Jamaican international Deshorn Brown for one one-and-a-half-year deal, till the end of the 2020-21 season.

Brown, who plays down the middle and is equally comfortable operating on the wings, will be a valuable addition in attack for the Blues who sit third in the standings after 10 rounds in the Indian Super League.

“We had the option of signing a seventh foreign player and we felt now was a good time to exercise it. Deshorn lends us more options in attack and even though he joins us in the middle of the season, we believe he will play his part in helping the team achieve its goal,” said Bengaluru FC head coach Carles Cuadrat.

After playing college football in the United States, the Jamaican turned professional in 2011 with Des Moines Menace in the United Soccer League. The following season he turned out for Reading United before making the move up to Colorado Rapids in the Major League Soccer. The attacker scored 23 goals in a little over two years for the Rapids in the American top-flight.

“It’s a difficult task, coming in mid-way through the season, but one that I am prepared for. I have been working on staying as healthy as I can. The club has shown great belief in offering me a contract and I’m aiming to give my best for Bengaluru. I did manage to catch the last couple of games and a few highlights. We’re in the play-off spot positions and that’s a good thing,” said Brown after completing signing formalities.

Having played in four countries on three different continents in the USA, Norway, China, and Spain, the Blues will expect Brown to settle in quickly with the business end of the season approaching fast.

“Playing in different countries is always a challenge mentally. Culturally, I love the game, and wherever it takes me. I’m excited to experience a new culture, and ready for the new challenge that comes with it,” he said.

In 2015, Brown moved to Norway for his first European stint playing for Valerenga in the Tippeligaen for two seasons, before moving to Asia for the first time in 2016 turning out for Chinese side Shenzhen FC in the Chinese League One. He returned to the US in 2017, playing for Tampa Bay Rowdies (USL) and DC United (MLS) before moving to Spain to play for Lorca FC in the Segunda Division (2017-18).

He last played for Oklahoma City Energy (2018-19) in the USL. At the international level, Brown has represented the Jamaican national team, winning the Caribbean Cup in 2014.

Brown now becomes the second Caribbean player to represent the Blues after Cornell Glen (Trinidad and Tobago, 2017), and the fourth one from the Americas after Roby Norales (Honduras, 2017) and Miku (Venezuela, 2017-19).