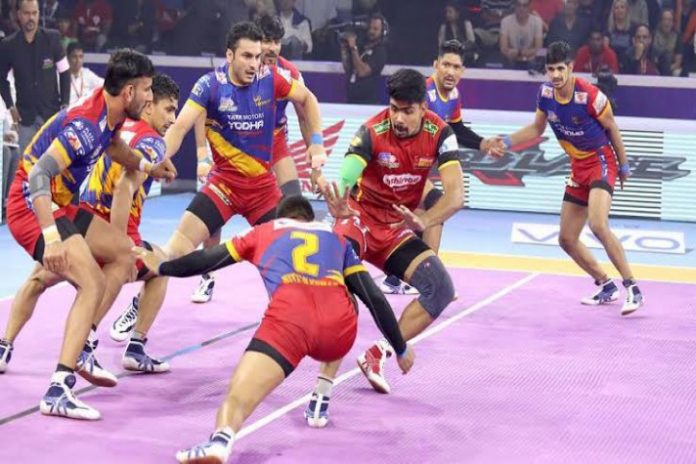 Pawan Sehrawat did the star turn as defending champions Bengaluru Bulls outwitted UP Yoddha 48-45 in the first eliminator to qualify for the semifinals of the Pro Kabaddi League season seven in Ahmedabad on Monday.

Star raider Pawan secured 20 raid points as the Bulls fought their way back in front of a packed audience at the EKA Arena to set up a semifinal clash with Dabang Delhi.

The UPside dominated the early minutes of a fiercely-contested first-half as Bengaluru struggled to get a stranglehold.

UP had defeated the Bulls both the times they met during the league stages and looked in complete control with Shrikant Jadhav impressing in the raids.

UP also had the advantage of momentum, with 23 All-Out in their last 11 matches (the best record in the league), and inflicted an All-Out on the Bulls in the 8th minute to open up a 7-point lead.

Nitesh produced stellar tackle in the first move after the All-Out to send Pawan once again to the dugout but the Bulls finally had success in the defence with a successful tackle on Surender Gill with seven minutes remaining.

The tackle brought Pawan back on the mat and the High Flyer produced a stunning 3-point Super Raid to halt UP’s dominance in the match.

Nitesh did produce a Super Tackle on Pawan with four minutes left to half time but the Bulls, buoyed by Rohit’s presence on the mat, secured their first All-Out with a minute remaining for the break. The half ended 20-17 with UP on top.

Bulls dominated the starting minutes of the second half with Mahender Singh coming good in the defence.

With the defence, scoring points the Bulls sniffer an All-Out and reduced the UP side to two on the mat.

But in Nitesh, UP had, arguably, the league’s best defender, and the captain produced two Super Tackles (in the 10th and 11th minute of the half) on Pawan to keep his team in the match and pick up a High 5.

Bulls’ Sumit and UP’s Shrikant impressed with their raids as the match entered the final four minutes with UP leading by 8 points.

Pawan produced some important raids to clinch an All-Out with four points remaining. Bengaluru had a one point lead going into the final play of the match but Surender made successful raid to level the points and push the point to extra time.

UP started the extra time on a high with a two-point raid by Rishank Devadiga that also sent Pawan to the bench but Sumit’s raiding and a team tackle on UP’s Shrikant meant at the half time in extra time there was only one point separating the sides.

Can Haryana Steelers make it two-in-a-row?