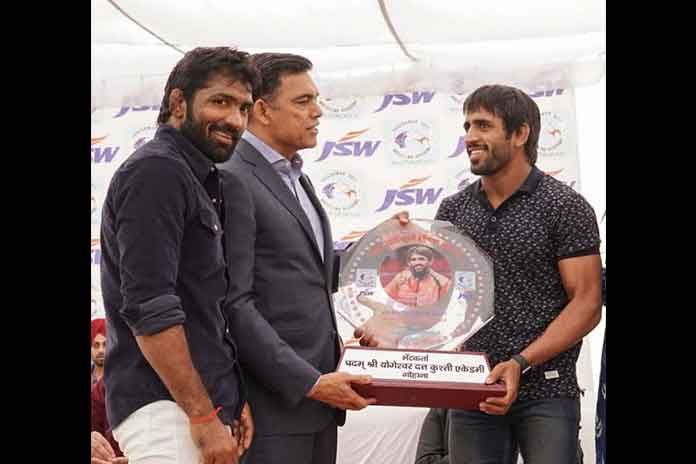 He wanted to convert his bronze at the 2012 London Games into an Olympic gold. Yogeshwar Dutt to live his bigger dream took the tough call of quitting wrestling.

Believe it or not! One of the top most Indian wrestling star Yogeshwar’s “pre-mature” retirement was influenced by his dream and determination to bag an Olympic gold for India.

Only the third Indian wrestler to win an Olympic medal after KD Jadhav and Sushil Kumar, Yogeshwar realised his favourite trainee Bajrang Punia stands a better chance of fulfilling his dream. The ace Haryana wrestler and Padmashree Yogeshwar immediately decided to hand his wrestling singlet to mentor Punia for realising his dream.

Yogeshwar says it was not a difficult decision to quit the mat since he did it for his favourite student Bajrang Punia, who he thinks can go on to become India’s first wrestler to win an Olympic gold, adds PTI.

In a glittering career, Yogeshwar has won gold medals at the 2014 Doha Asian Games; 2010 Delhi and 2014 Glasgow Commonwealth Games; 2008 and 2012 Asian Championships; 2003, 2005 and 2007 Asian championships besides several other silver and bronze medals at other prestigious international events.

The Haryana wrestler, celebrating his 35th birthday today, told PTI that he is focused on preparing Bajrang for the 2020 Tokyo Olympics. “It’s important that Bajrang is prepared and supported for an Olympic medal. He is good but can do much better. I can’t compete in 2020, so it is better, we help Bajrang. He will be a strong medal contender for gold in Tokyo,” said Yogeshwar.

“I had a good career. I played four Olympics. In our second line of wrestlers, Bajrang is doing well and can be better. So it’s important to give him that chance and support,” said Yogeshwar, who also competes in the 65kg category, in which Bajrang has emerged as a force.

But was it an easy decision to quit the sport?

“If it was not for Bajrang, I would not have quit the mat. I would have competed more and may be could have moved up a category. But I thought, it is a right decision. He is only 24. Since his junior days, he showed spark. I want people of India to see Yogeshwar in Bajrang now. I had a long career and I don’t want that Bajrang gets affected,” Yogeshwar said.

It has largely been a satisfying journey for Yogeshwar but not winning a World Championship medal is his only regret. “I don’t have a World Championship medal and I had thought of competing at Budapest this year. But I thought Bajrang is in good form and, respecting that I did not come in fray. And he won a silver. I had not played a tournament for long and was not in shape to give my best,” he said.

Yogeshwar said since both he and Bajrang competed in 65kg, there was a possibility of him moving up the weight category. “I could have tried 70kg but then there would not been many chances, I have never played in 70kg.”

Talking about Bajrang’s final bout at Worlds in Budapest, Yogeshwar said he needs to shore up his defence. “His defence has got better but this lacking has been there since his childhood. It takes time. We are on it. Losing that final at Worlds was painful. First, he needs to ensure that the opponent does not get hold of his legs. And even if he holds, the defence should be such that you don’t end up losing points from that position,” he said.

Yogeshwar said his personal ambition, apart from Bajrang, is to produce champions from his academy in Gohana. “I want wrestlers from my academy to become world champions. I don’t have government support but JSW is supporting us. They are sponsoring our 15 kids,” he signed off.