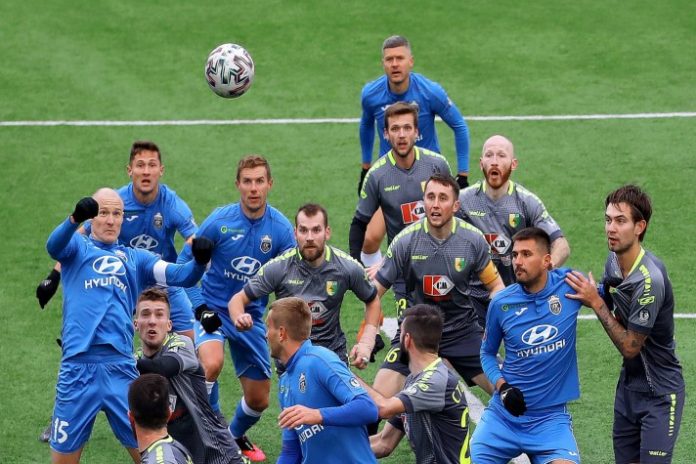 Slavia vs Minsk in Belarus Premier League will be intriguing encounter today between two week matched and balanced teams. Both the teams has two victories to their credit in 5 games. Slavia is going into this clash off the back of a 2-1 defeat against Isloch. But they have a relatively strong recent record on home soil going unbeaten in five matches, so this looks like a good chance to find some form.

After starting the season well, FC Minsk have slipped in recent games and have recorded a streak of three straight losses in the league, failing to find the net in any of those games. The visitors also have a poor record on the road in this competition, winning just once in the top-flight in their last six away games, and haven’t kept a clean sheet away from home in 13 games.

Back Slavia to grab the points on Saturday.

Finishing the 2019 edition of the Belarus Premier League in 8th and 9th position respectively, when Slavia Mozyr and Minsk go at loggerheads today, we are going to be in for an intriguing outing. These two are levelly balanced outfits, teams who have emulated each other in this edition of the frontier league as well.

Probable Winner- Back Slavia to grab the points on Saturday.

Although Slavia haven’t fared off any better with the side defeated 2-1 by Isloch Minsk the last time around to now be elusive of a win for two game weeks, they are clearly the more well versed and better equipped of these two sides. It’s the defensive side of the game which words in their favour, one which should see the side scamper its way to the three points today.

Arten Leonov will be our side’s goal-keeper for the forthcoming encounter. Although the Minsk goal-keeper looks set to come out of this one with atleast the one goal let in, it’s his acumen and articulate brand of goal-keeping which should see him accrue a slew of save points on the day.

Despite the Slavia side’s defence being far from renowned for its defensive acumen with the side’s absurd brand of defending leaving them aghast for the last two years, we’ll still be moving in for all the defenders from the side. It’s down to the quality of their opponents with Minsk having managed failed to have scored in their last three outings in the league.

And with Mozyr playing this one in the solace of their bastion, the side will be buoyed infront of a helpless and waning attacking unit to see us bring in all of Vladislav Zhuk, Igor Potapov, Igor Tymonyuk and Milkovic on the day.

Where Minks have been lacklustre in attack, their defence has been equally appalling and apathy filled. Having shipped in the 9 goals in 5 ties, the side is set to fall apart and lose its way today as well to see us move in for a partnership from the home side.

We begin our picks with the selection of the unit’s top scorer with two goal man Andrey Chukhley representing the side along with Aleksandr Kotlyarov who has the one goal and one assist to his name. From Minsk on the other hand, at a time when the attacking slot as fallen flat on its feet, Oleksandr Vasyliev has waged a lone battle to make the one goal and one assist player our pick alongside Vladyslav Nasibulin.

Minsk’s top scorer with the two goals in his kitty, Vladimir Khvashchinskiy will represent the side in this culminating ambit while the quirky Nikita Melnikov is our pick from the home side given the two goals he’s piled on for the side.