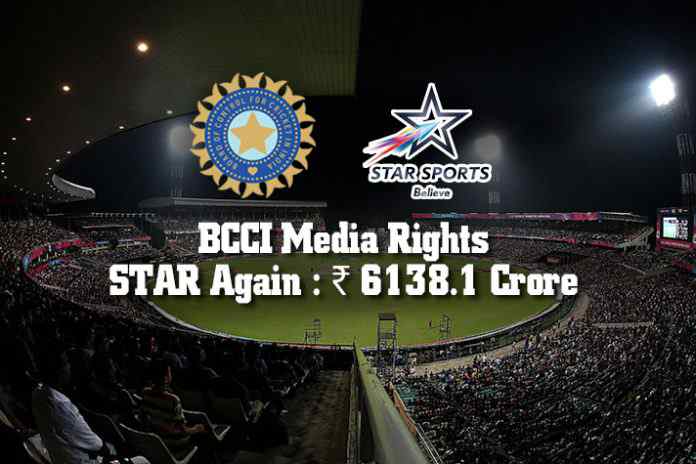 The e-auction process to decide the BCCI domestic media rights closed on the third day today in Mumbai with the winning bid ₹6,138.1 crore. This will amount to a world record ₹61.17 crore per match. This is almost ₹ 18 crores more than the ₹43.30 crore incumbent rights holder Star Sports has been paying to the board since 2014.

The BCCI domestic media rights are finally decided at the highest ₹6,138.1 for the Consolidated Rights package.

The BCCI has called a Press conference at 5 PM for the formal announcement.

Below are the previous Updates of Day 3 E-auction:

The Board of Control for Cricket in India media rights e-auction bidding value has reached ₹6,111.70 crore. The second e-bid on Day Three has registered a raise of ₹79.20 crore over the last bid on Wednesday.

The first bid on Day Three was recorded at ₹ 6,085.30 crores, the bid bar was raised within minutes by another ₹26.4 crore.

The bid war between Star India, Sony Pictures India Network and Reliance Jio Infocomm may intensify further. The market and BCCI bigwigs are expecting the media rights value for the international bilateral cricket in India to cross the $1 billion (₹6,500 crore) for the 2018-2023 five-year cycle.

The proverbial billion dollar mark is the next major milestone as the Board of Control for Cricket in India media rights e-auction process resumes for the third day today (Thursday).

The bidding war between two major sports broadcasters in the country – incumbent Star Sports and Sony Pictures India Network – fuelled further by the entry of the third aggressive player Reliance-owned Jio Infocomm has already assured the BCCI of a minimum of ₹6,032.5 crore from the media rights for the bilateral international cricket in India.

The ₹6,032 crore bid has also created the record of ₹ 59.14 crores for the highest broadcast rights fee for any cricket match. The bid has already passed the previous best, ₹55 crore Star Sports will be paying to the BCCI for each Indian Premier League match on account of the ₹16,347.5 crore five-year IPL media rights deal.

The market experts and BCCI insiders are expecting the bid to go beyond the ₹6,500 crore figure, primarily on the strength of the changing digital streaming landscape.

The e-auction process today (Thursday) will resume at 11 am.

Click here in case you have missed the Day 2 action of BCCI Media Rights E-auction.