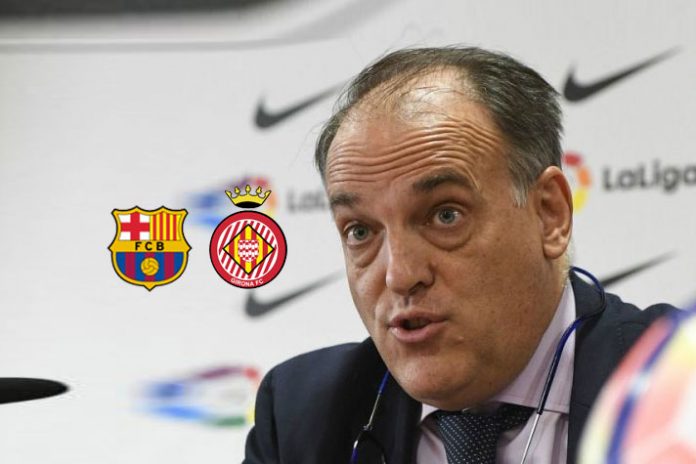 Barcelona and Girona may play the inaugural LaLiga game in the USA.

LaLiga chief Javier Tebas has said that there is a 90% possibility of Barcelona and Girona playing in the first game of the Spanish top-tier league in the USA. The match, in spite of hurdles from the FIFA and Spanish players’ body among various other quarters, may happen in January.

Tebas’ statement comes after reports that Barcelona will face Girona FC in Miami for a league fixture on 27th January, 2019 at the 65,326-seater Hard Rock Stadium which is home to the National Football League’s (NFL) Miami Dolphins. The report further mentioned extraordinary ticket concessions and free flights to fans with other discounted offerings related to hotel bookings and returns.

“Girona v Barcelona will 90 per cent be played in the United States but the agreement is not just about one game, it’s about a process which is much bigger,” Tebas told Spanish radio station Onda Cero in an interview on Friday.

Tebas added that the Girona’s joint majority shareholders, City Football Group, had encouraged the team to play the game and confirmed reports that Girona fans would be offered free flights to the game.

“The game is designed to help teams that don’t have a very big fan base. Girona are partly-owned by City and together with (the Miami Dolphins owner) Stephen Ross, they told us Girona were interested in playing this game,” Tebas said.

“Now, several teams with a similar profile to Girona have shown interest because they see it as an opportunity. Season-ticket holders will be compensated and there is an opportunity to travel to Miami. Relevent will pay the costs.”

Tebas further went on to reveal the league will earn $231.4 million (€200mn) from playing the Games in the USA as part of its 15-year deal with Relevent Sports, a private investment firm which was co-founded by Miami Dolphins principal owner Stephen Ross in 2012. Ross is also the owner of the Hard Rock Stadium, the potential venue for the Barcelona vs Girona clash.

Relevent Sports also organises the International Champions Cup series of pre-season friendlies between the major football clubs around the globe.

The plans, however continue to face opposition from a number of parties including Royal Spanish Football Federation (RFEF), FIFA president Gianni Infantino and Spanish football’s players’ union (AFE) who have threatened a player strike to protest against the move.

Apart from RFEF and FIFA, the LaLiga US expansion plans will also need a nod from UEFA, CONCACAF, the United States Soccer Federation (USSF), Spain’s National Sports Council and its foreign ministry.