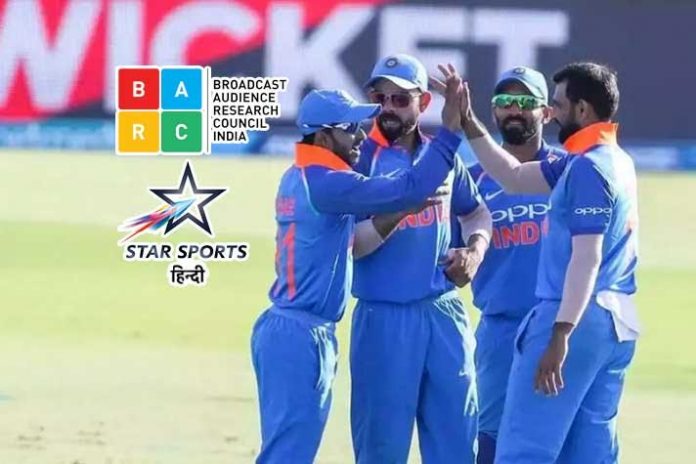 Cricket remains the deciding factor as Star Sports is back to rule the sports genre television ratings in India. Just a single match of the New Zealand-India one-day international series has completely tilted the scale in STAR Sports’ favour. The Week 4 (January 19 to 25) Broadcast Audience Research Council television ratings for sports have the Napier ODI at all the top five slots for the most watched programmes.

The live broadcast of the match with Hindi programming on Star Sports 1 Hindi tops the table with the mid-innings show in the second positon and post-match review at the fifth position. The game simulcast on DD Sports is positioned 3rd while the LIVE English feed on Star Sports 1 is in the fourth position.

There is no other sport or programme in the top five position. Sony’s long domination at the top comes to an end with the Indian cricket team’s live international series coming on Star Sports. Sony Sports cluster has been sweeping the sports ratings charts last year with Team India’s long tours of South Africa, England and Australia.

The ratings for the Napier Test also helped Star Sport 1 Hindi dethrone Sony Ten 3 from the No. 1 position. Albeit, there is over 250% fall in the gross impressions for the No. 1 sports channel for the week. Sony Ten 3 in spite of managing to stay in the second position has lost around 600% eyeballs in a week’s time.

The presence of Sony Ten 3 and Sony Ten 1 is an indicator that the network has reasonable non-cricket content to keep Sony Sports Cluster channel in the top 5 tables.

Star Sports will make bigger gains in the week to come. There will be three India-New Zealand ODIs during the ratings period. Mahedra Singh Dhoni’s return to form and India’s win to seal the 5-match series with a 3-0 unassailable lead at Mount Maunganui should augur well for the Star Sports channels.

Sony Sports on its platter will have the Pro Wrestling League semi-finals and the final.