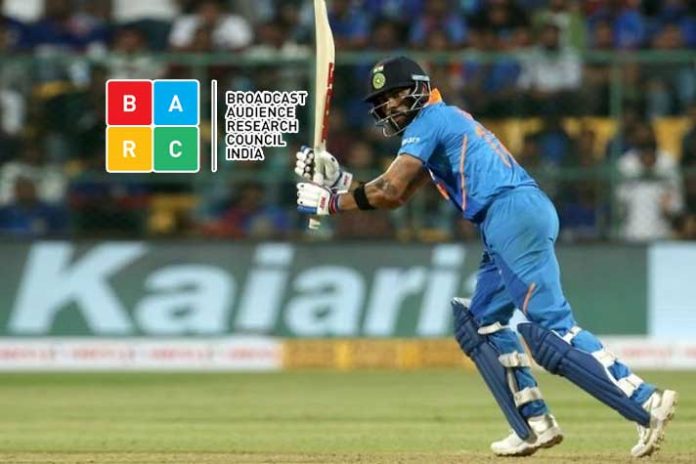 India’s T20I games against a low key Sri Lankan teams had attracted more television audience than the high octane One Day International cricket series against the full strength Australian team. The LIVE broadcast of the first two ODIs has enabled Star Sports 1 Hindi maintain its stronghold on the most-watched top 5 sports shows table, but there is a considerable decline in gross impressions for the matched individually.

To put the things in perspective, the third India-Sri Lanka T20I in the previous week had generated  1,54,80,000 impressions as the No. 1 show. This week LIVE broadcast of India’s win over Australia in the second ODI is the most-watched sports show with 1,20,21,000 impressions

Star Sports 1 Hindi as the most watched sports genre channel in the week has registered 30% more impressions over the previous week. However, DD Sports in spite of a quality dose of LIVE ODI cricket has lost in eyeballs. Though it manages to maintain its second position for yet another week.

Hindi language LIVE broadcast of the India-Australia ODI series has also enabled Star Sports 1 Hindi HD sneak into the top five table. Star Spots 1 and Star Sports First with swapped positions are in the No. 3 and 4 sports channels for the week, but with a considrable fall in gross impressions.

Star Sports 1 Hindi tops the table with the shared LIVE feed of the match on DD Sports coming in a distant second.

Star Sports is well-positioned to maintain its supremacy in the genre as the week ahead will have the audience data for the ODI series decider against Australia and the first T20 International on India’s tour of New Zealand. Both the games were won comprehensively by the Men in Blue.