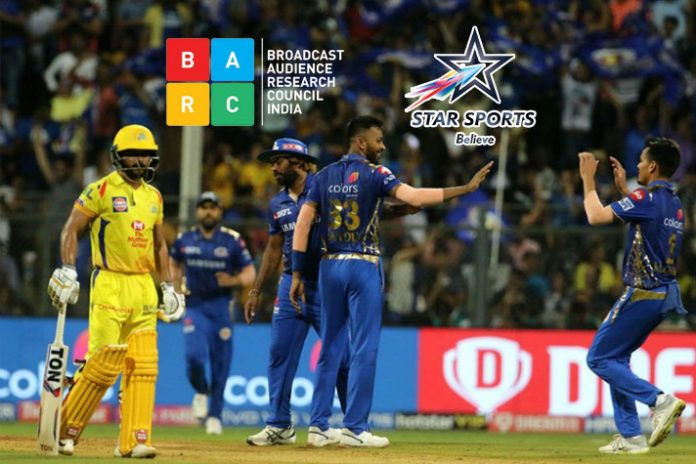 Star Sports 1 Hindi remains the most watched sports genre news channel on the strength of the Indian Premier League (IPL) 2019 live broadcast, while the games involving Chennai Super Kings have more television audience than any other match.

The first three among the five most-watched sports programmes in the Broadcast Audience Research Council (BARC) ratings for Week 17 (April 20-16) are the Chennai Super Kings respective matches against Mumbai Indians, SunRisers Hyderabad and Royal Challengers Bangalore. The CSK-MI match on Friday, April 26, remains the most watched show for the week with 1,66,71,000 impressions.

In spite of RCB being the first team to crash out of the qualifying race, the Virat Kohli-led side has a fan base on television second only to CSK. RCB’s both the games in the week – against CSK and  Kings XI Punjab – have figured in the top five sports genre shows list in the third and fourth positions respectively followed by the Rajasthan Royals and Delhi Capitals match on Monday, April 22.

It is yet again an IPL clean sweep for all the top five positions on the BARC table for the most watched sports programmes.

With a marginal dip in the IPL audience, Dangal has yet again displaced Star Sports 1 Hindi from the most-watched channels position across all genres. For the second successive week there is a minor dip in gross impressions on Star Sports 1 Hindi – the number falling to 1,03,71,64,000 from 1,04,66,42,000 in the previous week week.

However, there is no change in the Top 5 most-watched sports genre channels position with Star Sports cluster channels occupying all the positions. Star Sports 2, broadcasting IPL’s live English feed, and free to air Star Sports First have made minor gains in the second and third positions respectively.

The next week’s ratings will feature some of the intense battles and heroics of the likes of Andre Russell and Hardik Pandya, who had set the stadium, TV screens and social media ablaze with their whirlwind knocks during the Mumbai Indians-Kolkata Knight Riders game on Sunday last. The action has also got intriguing with an intensified battle for a place in the qualifiers. The Star Sports Networks and sports genre are bound to continue their domination for the next few weeks.