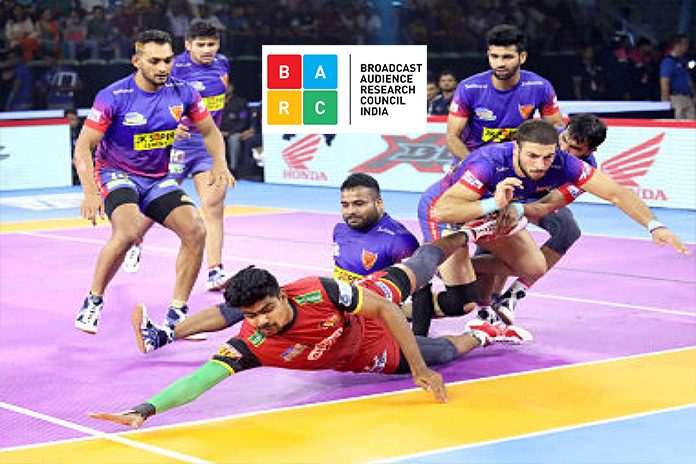 Pro Kabaddi League has made phenomenal gains in television audience ratings, even as sports genre suffers a massive downfall as cricket fails to deliver even when Team India was heading for a whitewash in the Three-Test series against South Africa and Rohit Sharma was in the form of his life to shatter even Sir Donald Bradman’s proverbial unassailable averages at home.

It is Pro Kabaddi League that kept Star Sports ahead in the Broadcast Audience Research Council (BARC) of India television audience ratings for Week 42 (October 12 to 18). In fact, games involving Bengal Warriors are in the Top 5 most-watched shows list. Bengal vs Mumbai and Bengal vs UP ties at Ahmedabad have figured twice in the top-five list with the LIVE broadcast on Star Sports 1 Hindi and Star Sports First.

The Delhi vs Bengal PKL game in the number one position has gained over 30% impression over the previous week’s most-watched sports show.

Star Sports 1 Hindi after an impressive Week 41, registered a steep fall. Primarily, because interruptions due to bad light on the first two days of the Ranchi Test too have affected the cricket broadcast numbers. Strangely though Star Sports First in the second position has lost marginally in aggregate impressions for the week.

In another significant change, Star Sports 2 moves on to the fourth position as the expense of Sony Ten 3

The next week ratings will have the numbers for the PKL final between Dabang Delhi KC and Bengal Warriors and the last two days of the India-South Africa series. Star looks well poised for another week atop the BARC ratings.