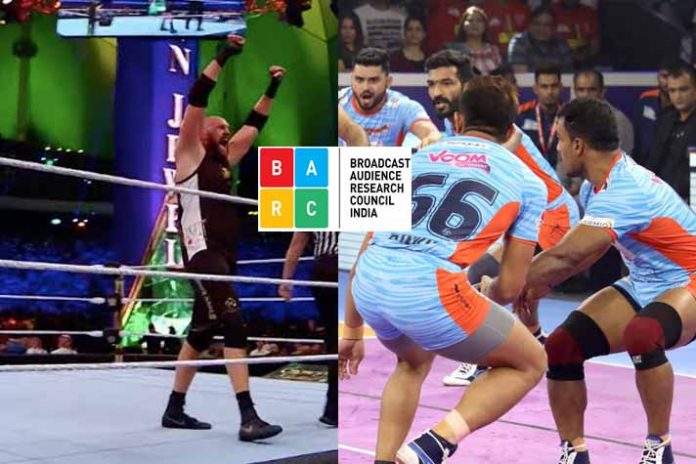 Sony Sports cluster is the Indian sports television market leader for the week as WWE has reigned supreme on the strength of its committed audience base.

WWE Crown Jewel Knock Out, Crown Jewel 19 and Crown Jewel repeat telecasts occupy four positions among the five most-watched sports genre shows for Week 44 (October 26 to November 1) in Broadcast Audience Research Council (BARC) ratings when there is no significant cricket and Indian Super League has failed to deliver the numbers expected from the premier professional club football  league in the country.

WWE Crown Jewel Knock Out LIVE broadcast is the most-watched sports show for the week. Only one Indian Super League match, North East United versus Odisha FC in Guwahati, in the second position is followed by WWE in the other three positions.

The week, however, has been disappointing for sports over 70% decline in sports genre ratings.

Star Sports cluster, market leader on the strength of Pro Kabaddi League and international cricket, has lost almost 70% eyeballs in the week when WWE has been the savior and key ratings determining factor for the genre. Sony TEN 1 and Sony TEN 3 are respectively the two most-watched channels for the week.

BARC Ratings: PKL keeps Star Sports ahead when there is significant cricket

Star Sports will have an opportunity to regain its lost position as ratings for next week will when the audience details for the first and second T20 International between hosts India and Bangladesh will also come for consideration.