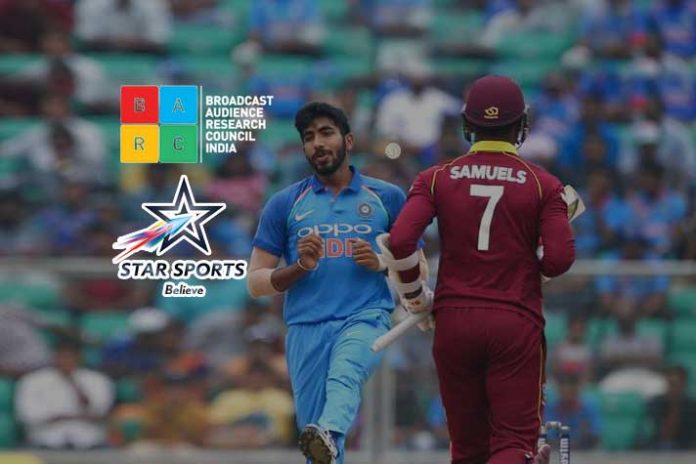 Cricket rocks and the rest flops. That seems to be the essence of sports genre broadcast ratings on Indian television for the week.

The Broadcast Audience Research Council (BARC ratings) sports genre top five shows’ overall impressions show more than 50% surge as the live broadcast of the first two games of the India-West Indies T20 series sweeps the charts for the most watched sports programmes. However, in spite of an impressive gain for cricket, overall sports genre ratings for week 45 (November 3 to 9) have collapsed significantly for market leader Star Sports cluster.

Sony Ten 1 though has managed a little gain in gross impressions to progress to the No 4 position, relegating Star Sport First to the bottom of the Top 5 Sports Channels list. Star Sports 1 Hindi and DD Sports continue to hold the first two positions, thanks to the India-West Indies T20 series. However, in spite of 70% to 80% gain in cricket audience, channels overall have suffered deficit in gross eyeballs.

The top five shows for the week remain live cricket broadcast. The second T20 International between India and the West Indies that went to the wire in spite of Shikhar Dhawan and Rishabh Pant crackers has generated the most eyeballs, almost double than the most watched ODIs between the two teams. Star Sports 1 Hindi generated (13,641,000 and 13,247,000 impressions respectively for the second and the first T20I as the most watched sports shows for the week. The simulcast on of the two games on DD Sports holds the third and fourth position in that order.

The next week may spell more trouble for the sports genre. There will be no valuable cricket content except for the third and final T20 International between India and the West Indies. The trend for other programmes holds little hope for sports property owners, broadcasters and other stakeholders alike.