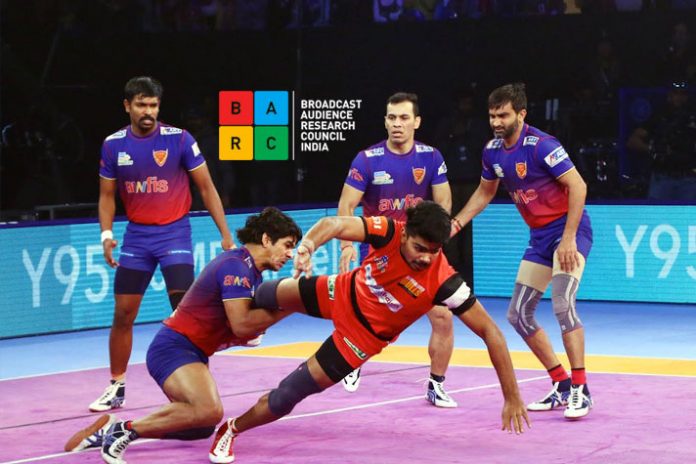 Pro Kabaddi is the king of the week on the Broadcast Audience Research Council television audience ratings chart even as the sample period covered first two days of the Adelaide Test between hosts Australia and India.

Kabaddi’s complete clean sweep on the Top 5  programmes’ list also raids out the notion that on Indian television no other sport sells, except cricket. The week 49 (December 1 to 7) also accounted for the ratings of the first two days of India’s Test series opener Down Under, but the live broadcast of Pro Kabaddi league games on Star Sports First and Star Sports 1 Hindi are the top five sports genre shows of the week.

Pro Kabaddi’s grand success may partially be attributed to the prime time broadcast, but live Test cricket in the early morning segment has been beaten hands down.

Kabaddi’s unprecedented success has also marginally consolidated Star Sports First’s position as the No. 1 sports genre channel for the secon. Star Sports 1 Hindi in the No. 3 position too has gained in gross impressions. Sony Ten 3, with whatever little cricket, stays in the No. 2 position despite losing out on gross impressions. Sony Six and Sony Ten 3 too have held on to the fourth and fifth position respectively despite a dent in gross numbers

Star Sports’ aggressive marketing with MS Dhoni as the lead face of campaigns and the long season entering a decisive phase have also contributed to Pro Kabaddi’s gains. The next week ratings will also account for the last three days of the Adelaide Test. However, if kabaddi and Star Sports manage to retain their current position, the broadcasters for the Australia series will have to  do more brain storming.

Kabaddi is going to gain momentum and compete with Test cricket throughout the series. The fourth and final Test gets over on January 7 and the kabaddi finals will take place on January 5. That can potentially spice up the sports genre ratings war on Indian television.